I love Brazilian coffee. There’s obviously the taste, strong but not bitter and incredibly sweet, but it’s the serving of Brazilian coffee makes me smile: in minuscule cups. I appreciate something small and excellent, like Meu Doce Pará cookies that are smaller than the tip of my pink.

So it is with Brazilian coffee. The first time we were served coffee in Brazil, we were looking at our cups with some surprise. We had never seen such tiny plastic cups, about two inches high.

I will admit, the taste is not for everyone as Brazilian coffee is generally served incredibly sweet. However, things are changing in Brazil, even when it comes to something as traditional as super-sweet coffee. When we traveled here for the first time, in 2007, coffee was always sweetened.

Nowadays, you can often choose between a sweetened version and an unsweetened version to which you can add as little or as much sugar as you want, or adocante (artificial sweetener), which is becoming increasingly popular here. 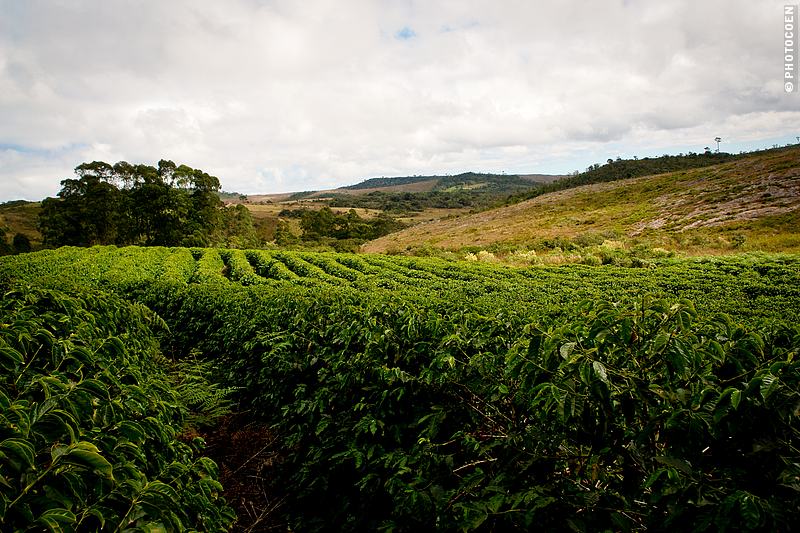 Brazil is unique in her coffee culture. It starts with the word: In this country you don’t drink café. Here you drink a cafezinho: a small coffee. The cafezinho obviously fits the size of the typical plastic cup in which it’s served, which I have seen nowhere else. Some places (homes, for example) they use china, but in public places plastic is still the norm (very unfortunate for the environment).

In Brazil the preparation of coffee is different from anywhere else (as far as I’ve seen). Brazilians boil water, add coffee, stir quite a long time and (traditionally) add lots of sugar. This goes entirely against the official coffee-making rule according to which the water for a good cup of coffee should be 90 degrees, maximum. In Brazil, coffee is boiled. 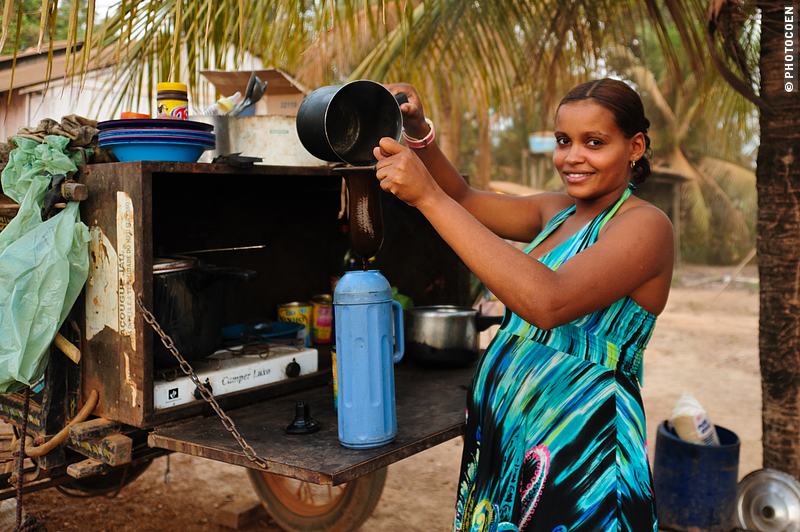 When the taste is right, the coffee is poured through a cotton coffee sock although, via the media, the government is trying to get people to use plastic filter holders with disposable paper filters (for hygienic reasons).

At gas stations there is always a thermos of coffee available, which sometimes stands next to the cashier. You may also walk inside the restaurant and just ask at the counter for a cafezinho, which is free of charge. 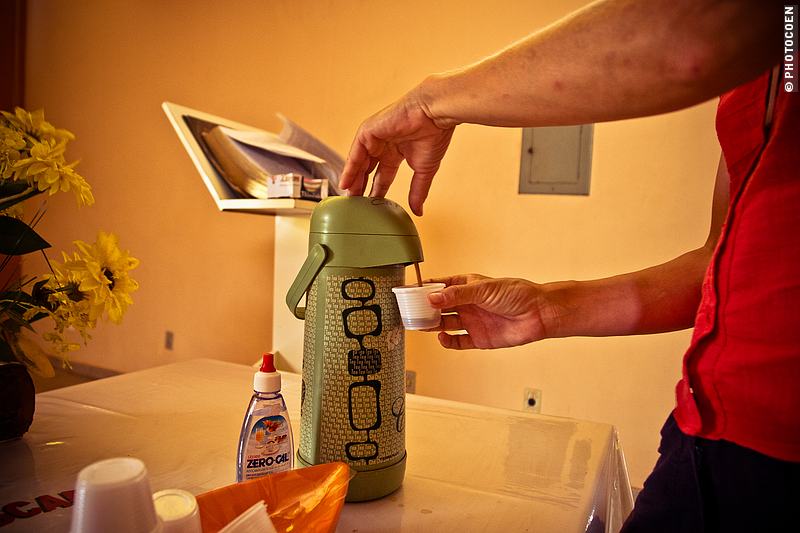 Free cafezinho is also served in ordinary restaurants where you eat a prato feito (fixed meal) or from a pay-per-kilo buffet (by contrast, in luxurious restaurants coffee is served in china and is added to your bill). By the way, another interesting feature in many restaurants, depending on the region, is the presence of a bible. The serving tray with thermos, sugar and plastic cups often stands next to it.

I like this hospitable culture where coffee is offered free of charge. It is a small gesture that makes me smile. It’s not about not being able to afford a cup of coffee; it’s the gesture, the culture, the tradition.

The first time I wanted to pay for a cafezinho at a gas station, as yet unaware it was free of charge, the woman behind the counter looked at me shocked. “No, this is our way of showing hospitality,” she immediately stated, which left no doubt that the issue is almost one of honor. 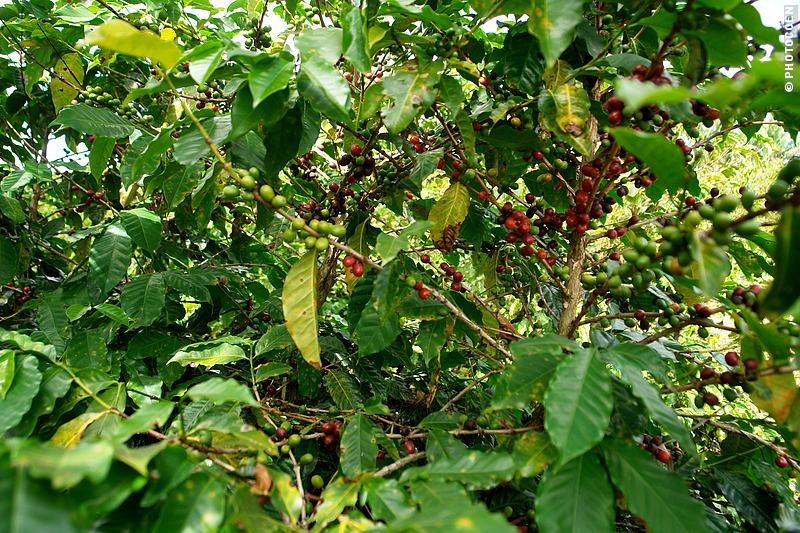 The boiling of water, the adding of coffee and sugar and stirring is a process that takes time. It’s done with dedication and does not allow distraction. If you happen to be the unlucky one to find the thermos empty, the restaurant/gas station owner will most likely say, “I’ll make a new one. No problem. Rapidinho!” (“very fast”, never mind that it may take twenty minutes or longer; in Brazil lots of things are done rapidinho in this way).

But What if There’s No Gas Station or Restaurant?

I became an addict to Brazilian coffee. Rapidinho…

When we left the Netherlands in 2003 we always drank Nescafe instant coffee because it was fast and easy – and you do get used to it (as do your intestines). Six years later, after having traveled in Brazil for six months, I stated to Coen, “I can’t go back. I simply can’t. How could we have lived on Nescafe for so long? What a junk. From now on I will prepare my own Brazilian coffee.” 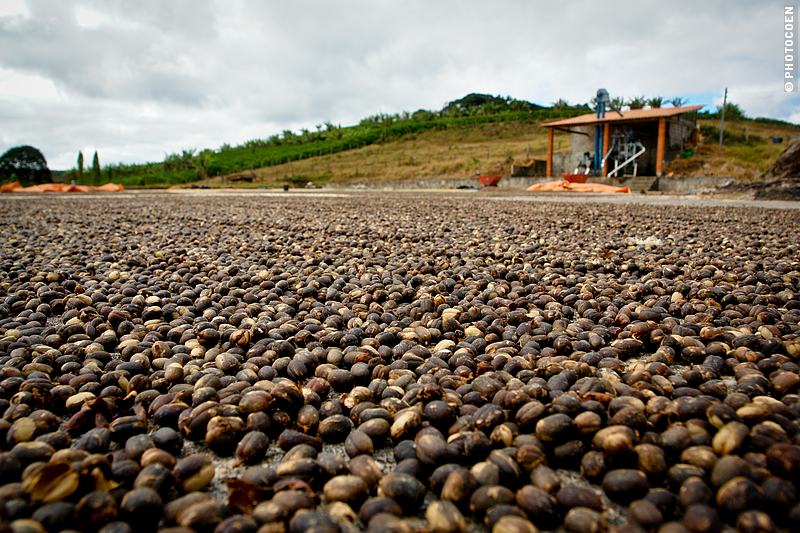 I bought a filter, a small thermos and by trial and error learned to make a reasonable Brazilian coffee (I still can’t beat the one made by locals, there must be a secret touch somewhere). Before leaving Brazil to go to Bolivia in 2010, I bought ten packages of Brazilian coffee wit and when going to the Guianas a year later, I doubled that number.

No way am I going to run short anymore. Even the generally much-appreciated Dutch coffee of Douwe Egberts which is widely available in Suriname doesn’t come close.

There was one thing missing in my system though: the right cups. We have these big thermos cups from which we drink tea, Nescafe, wine, yogurt, coffee, beer, caipirinha (that just about covers it, I think). Drinking Brazilian coffee from such a big cup feels like an insult. Brazilian coffee is not meant to be drunk in large quantities and deserves a properly sized cup. 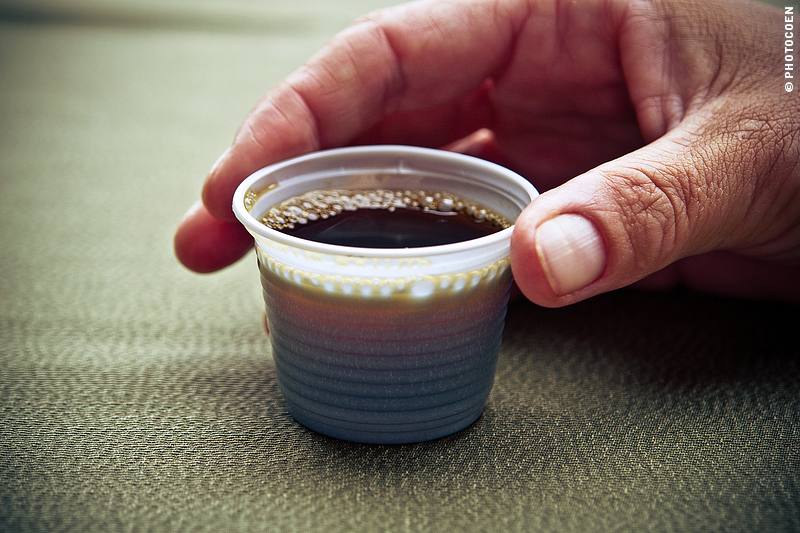 So, when I was in the Netherlands, I set myself a shopping mission. China obviously won’t last long in the Land Cruiser but I had seen – at one point in time – stainless steel espresso cups. Apparently, that fashion had long passed; now that I needed them I couldn’t find them. Bless my mother-in-law. She had two. And I could have them.

Every morning, after our breakfast ritual that still comes with tea and toast, I have my second ritual: preparing my Brazilian coffee, which is now drunk from lovely tiny stainless steel cups. It’s a perfect way to start the day and still is one of these small joys in my life. 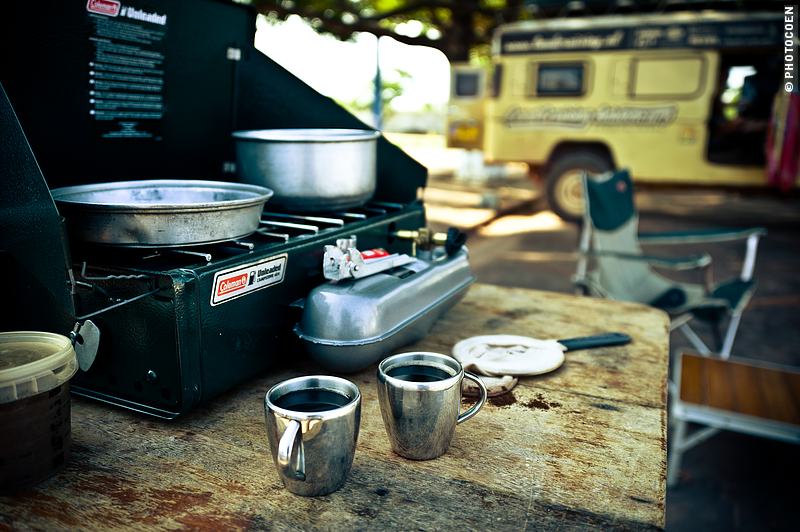 Our own Brazilian coffee, in properly sized cups

Edited to add Jan ’15: the cups stayed, but the way we prepare our coffee has changed. Want to know how? Here you can read all about it.