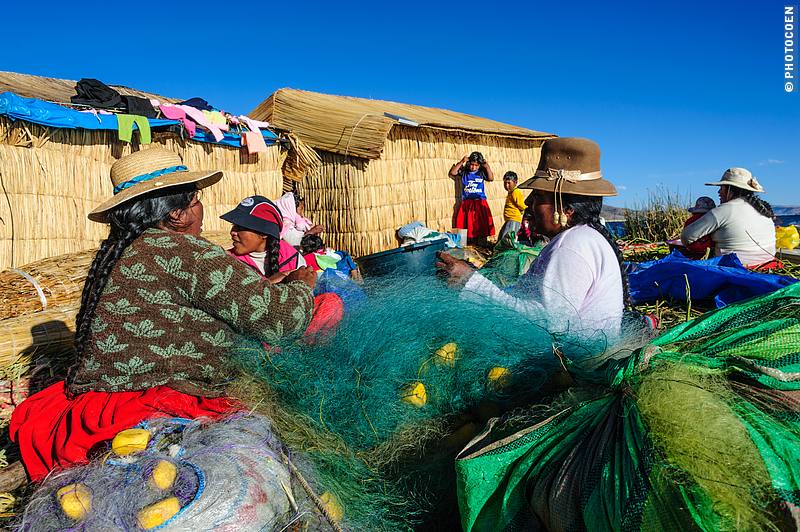 Living on an island of reeds, in a house of reeds, sleeping on a bed of reeds, cooking on the fuel of reeds, and fishing from a boat of reeds? How intriguing is that? Please meet the Uros People of Peru.

The Uros’ way of life has fascinated me for years. According to the story, when the conquistadores, Spanish conquistadors, invaded their territory, the Uros fled and decided to go and live on Lake Titicaca in Peru, which is South America’s largest lake and one of the navigable lakes at the highest altitude in the world (3810 meters).

It must have been a creative mind to have come up with the idea to use the buoyant torora reeds, which grew (and grow) in abundance in the shallows of the lake, and which they already used for boats, to build islands and houses. Even though the threat of colonial invaders no longer exists, the Uros people have continued to live on the water.

A specific part of Lake Titicaca is their home, inaccessible to outsiders so their culture won’t be contaminated, and only a number of islands can be visited which, as you can imagine, is a highlight when visiting Peru. 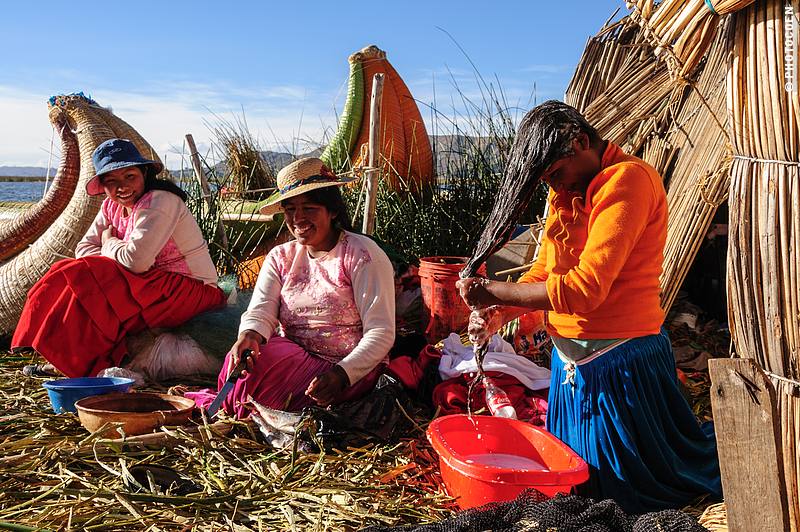 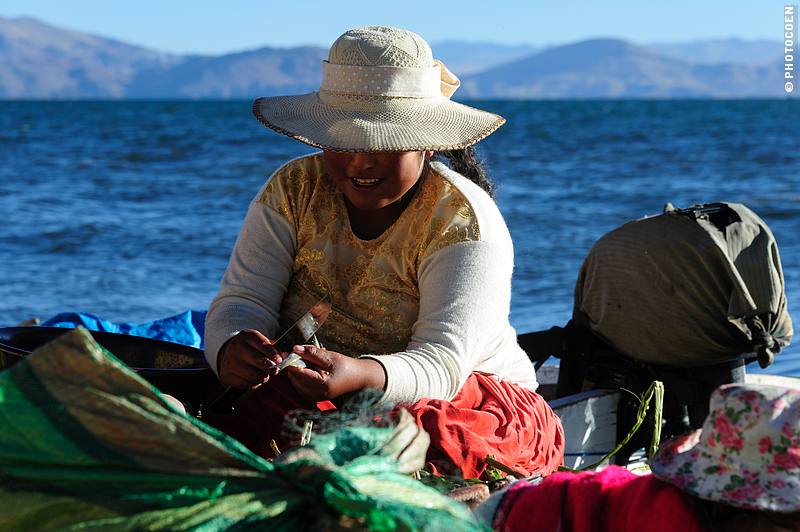 Puno is the main destination from where people visit the islands. However, I had heard about a place called Llachón, on a peninsula northeast of Puno, which apparently was a not only beautiful region to visit, but also a quieter place from where to take a boat to the floating islands. The choice was easy.

Coen and I set off from Puno, drove the scenic stretch north of Lake Titicaca and down the peninsula. The last part was a dirt road, which meandered through agricultural fields and small communities. It was late afternoon and farmers were taking their sheep and cattle home. 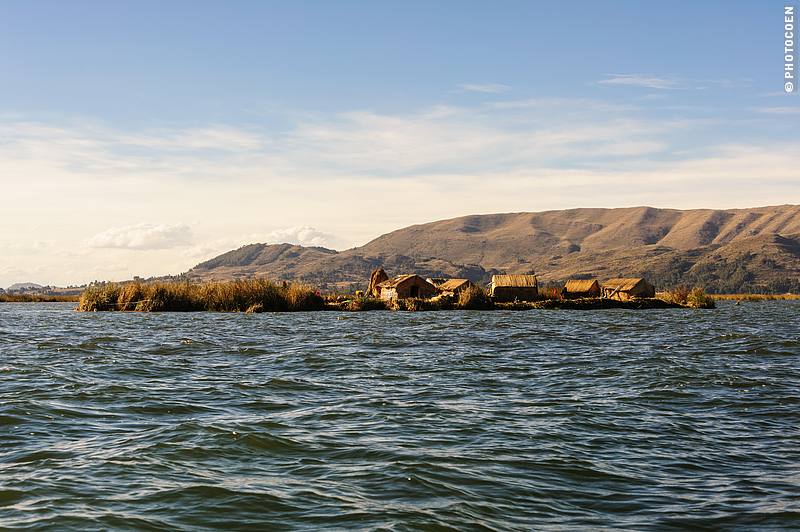 A boat ride to the Floating Islands

In Llachón we met Primo, the owner of a hostel right on the plaza of the village, who could organize a boat trip for us. We hooked up with an Austrian couple and the next afternoon set out in an open boat. I’ve visited Lake Titicaca several times but, to me, it remains one of the most bewitching places on earth. Its cobalt blue waters are hemmed in by agricultural fields and hills covered in scrub, with the snow-capped mountains of Bolivia towering overhead.

It took half an hour or so to reach two islands. We clambered on the shore of one of them and were welcomed by a couple of women. No doubt this is a touristy affair with a high level of ‘monkey watching in the zoo’ as I call it, which generally brings a feeling of ambiguity with it, but I have to say it was easygoing and fun. I compared it to a business transaction: we came to see how they lived and in

I compared it to a business transaction: we came to see how they lived and in return we would buy some of their craft and all this happened in such a pleasant way that everybody felt good about it. 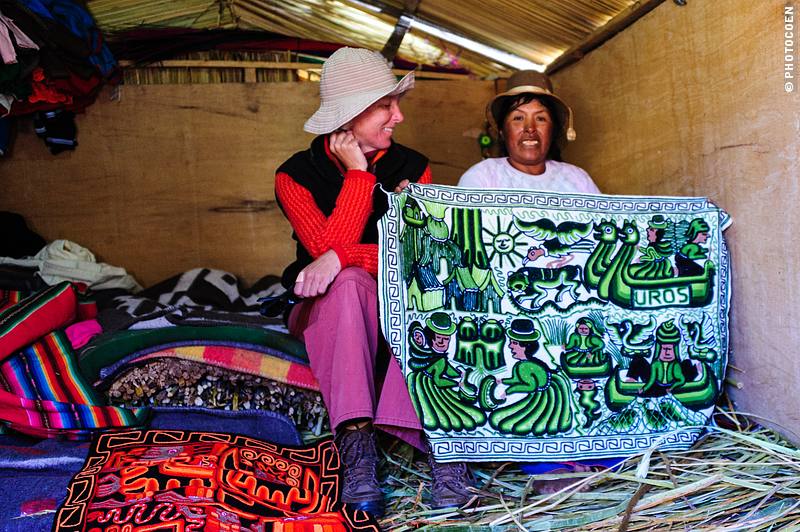 While Coen, always the photographer, took off to make use of the beautiful late afternoon light, I got to talking with two women. I wanted to know so much: How come the island doesn’t drift to the shore, how often do they change or add new reeds, do they drink the water from the lake? I wasn’t the first to ask these questions and they were well prepared.

They had built a miniature island so they could demonstrate to visitors how they anchored their island to the floor of the lake with ropes and wooden pens, how they replenished the reed (monthly on the island, houses every two weeks, beds every month – which could vary depending on the season) by adding new layers to the top, how they build their fires, make their handicrafts and cook their food. It was niftily done and a pleasure to listen to. 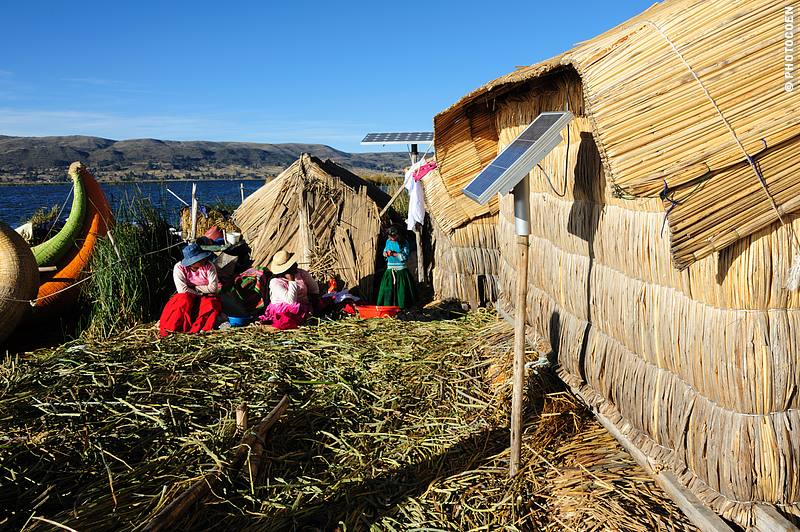 Modernity has penetrated the islands. They boil the water of the lake before drinking it, and since a year they have electricity thanks to solar panels. No more houses (or even a whole island) burn down because of a candle, which apparently was quite a common problem. Money has been introduced with tourism but they still have a money-free economy of swapping fish for other products like corn or rice with mainlanders.

We were invited to enter their homes, check out those beds made of reeds and covered with a thick layer of blankets. We chatted while they demonstrated their crafts of embroideries, miniature torora-reed boats and ceramic trinkets. 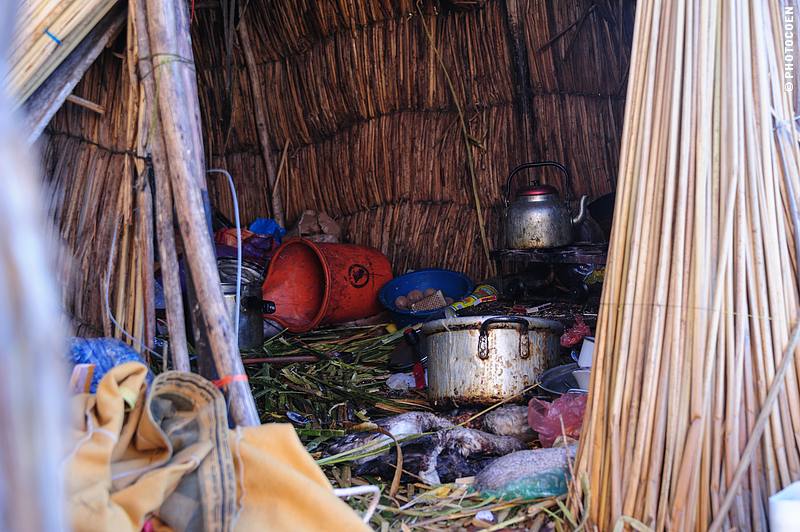 Even though beforehand I had seriously pondered whether I wanted to go here, exactly because of that monkey-watching feel, I am glad I went. What I appreciated most of all was their honesty. They said they no longer used the torora reed boats – “They are just here for tourists, would you like to sit in one?” – but open wooden boats with an outdoor motor.

They didn’t hide the fact that they no longer cooked on reeds but on gas. Simple things, which gave honesty to the whole affair and prevented it from looking like some sort of mock-up.

Enjoy more stories:
Indian Food – Eating From a Lotus Leaf
5 Places in South America to Stand in Awe Before Forces of Nature
Is Tourism always Welcome?