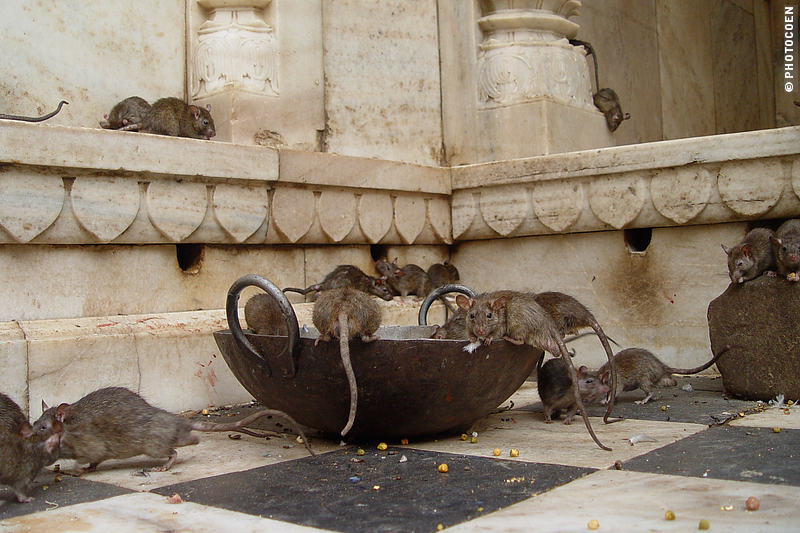 Can you imagine walking among thousands of rats without freaking out? I couldn’t, but I did, anyway, in the Karni Mata Temple.

When I was reading my guidebook it sounded exciting, exotic if you like: visiting a rat temple. A place where thousands of rats can eat, sleep and multiply without having to fear for their lives. I put the Karni Mata Temple in Deshnok on my list of sites to visit when traveling through Rajasthan, one of India’s most popular tourist destinations.

I’ve come across intriguing forms of worship in India but worshipping a goddess through rodents, well, I wonder if there’s anything that matches this extreme. After my visit I learned that if you kill one of these rats by accident, you have to offer the temple a rat statue in gold.

I wish I had known this detail beforehand, so I could have checked how many statues there were. It might have distracted me a bit. You see, it’s not unthinkable to step on a rat in this temple. 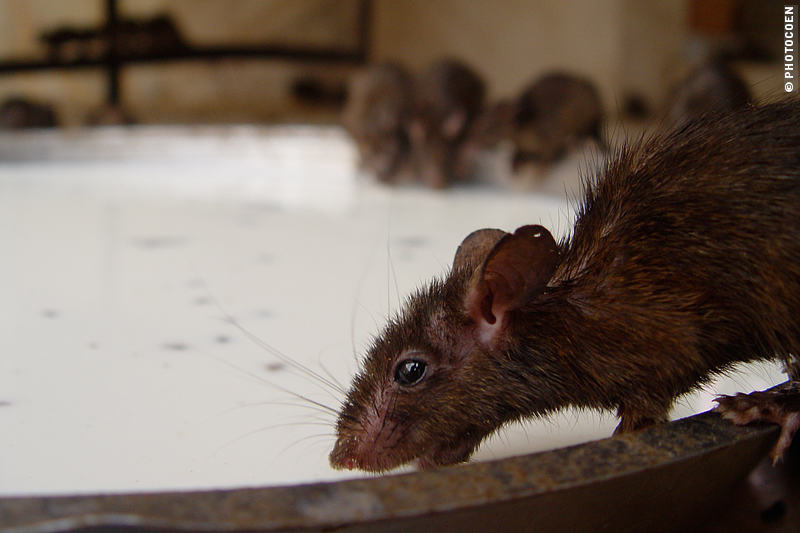 The Legend of the Karni Mata’s Rat Temple

Deshnok is probably the only city in India without a rat problem. These gnawing creatures don’t need the town’s houses and streets because they live in their own five-star hotel: the Karni Mata Temple, with some twenty thousand relatives.

There are differences in the legends about this rat temple. This is the version told to me by a local as I visited the temple:

“Karni Mata lived around 1500. She was a mystic, believed to be an incarnation of the Hindu Goddess Durga. When a child of a famous storyteller died, Karni Mata tried to bring him back to life, but Yama – the God of Death – had already claimed him. Karni Mata decided that from then on all storytellers would reincarnate as rats so Yama would no longer be able to have their souls.”

What I haven’t been able to figure out is why a goddess preferred having storytellers return as rats instead of being reincarnated as human beings. Does it have to do with Yama not being able to claim their souls? Legends may be intriguing, but don’t always explain everything. 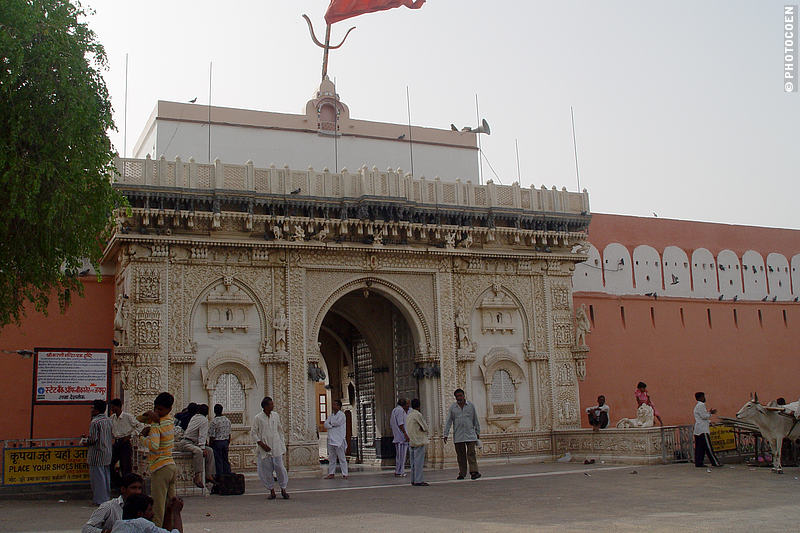 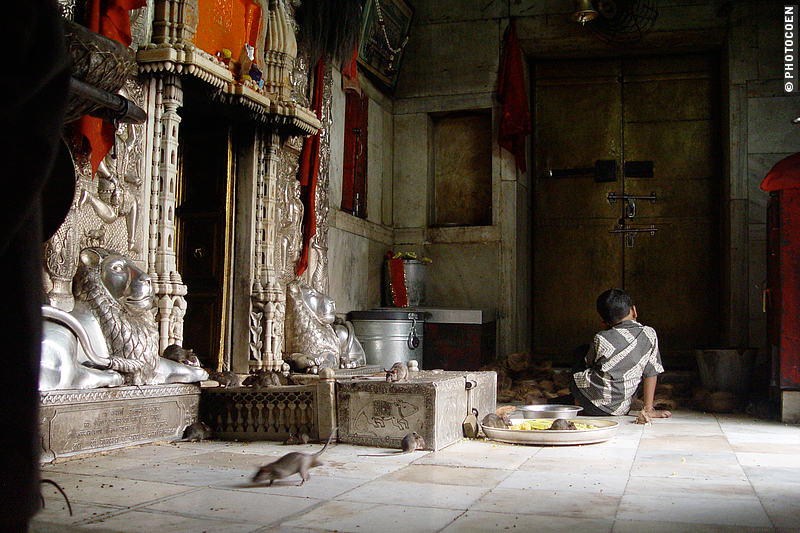 Visiting the Rat Temple without Losing your Cool

So there you have it: A rat’s utopia.

The outside gives no clue on what you’re getting into if you are unfamiliar with the story of this temple. It’s an ordinary-looking temple of red walls with a white marble entrance and yellow sandstone with intricate carvings.

Since it is a Hindu temple, Coen and I followed the custom of taking off our shoes before entering. Fortunately, we had arrived during the afternoon, which is siesta time for many of the rats. Apparently,  visiting the temple during late night or early morning hours is a more challenging experience for the uninitiated. 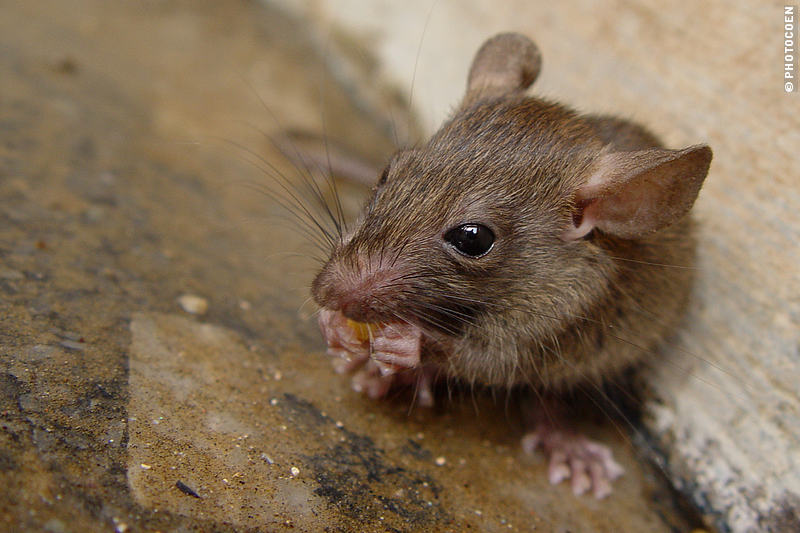 I wished I had learned to meditate, or to keep my cool like Buddhist monks can – not to mind and remain undisturbed, no matter your surroundings. It took the utmost discipline for me not to scream, yell or misbehave in any other way – this is a place of worship, so we did have to show respect.

Nevertheless, I did become unusually jumpy with so many large mice-sized creatures running about – never mind the fact that a rat running across your foot is supposed to bring luck. The rodents were all over the place and, obviously, the floor was sticky. Fortunately, there are wash basins outside.

A Rat’s Life in a Sacred Temple 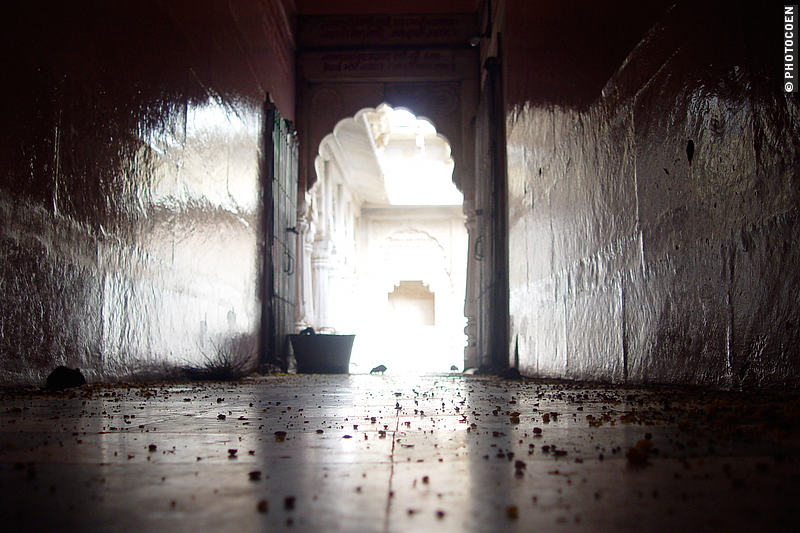 When my heartbeat returned to its normal pace I looked around with different eyes and smiled at what I saw. Rats were sleeping on the narrowest fences with their bodies wrapped around the poles, some delicately kept their balance on the edge of metal bowls while they fed themselves on grain or milk, others peacefully nibbled on whatever was strewn on the ground.

They most certainly didn’t seem gnawing, which is a characteristic of rodents. They were all busy with their own lives and didn’t seem to care that worshippers and onlookers intruded into their territory.

If you don’t like to have a rat running over your feet for luck, you may try something else: Spot a white rat, of which there are supposedly a couple and which is highly auspicious. We didn’t see one but it was the least of my worries. I have my share of luck in life.

The temple is inhabited by rats but devotees come there to pay their respects to Karni Mata. She has her own shrine, surrounded by beautifully carved silver sculptures and is guarded by silver lions.

Another auspicious action is to go to the inner temple but as the entrance is reached via a narrow, unlit alley crawling with rats, I chickened out. Coen put on his poker face, “They don’t do anything,”  he said and did his rounds. He was right, of course. 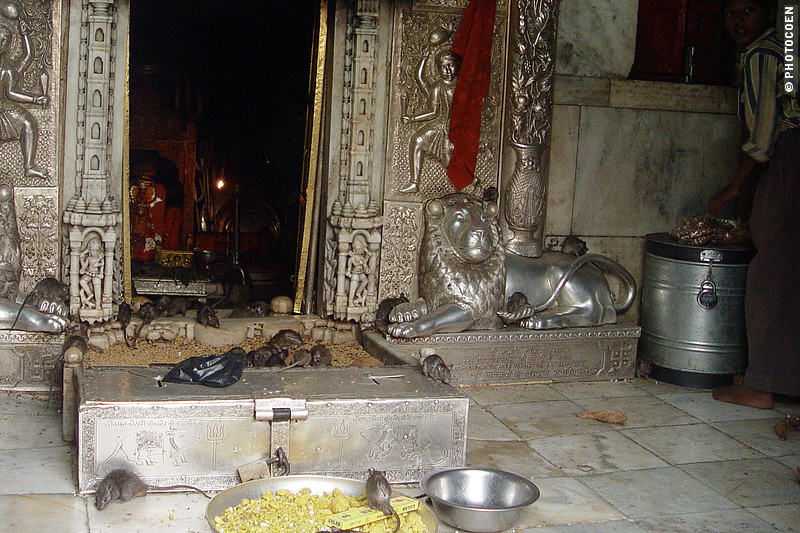