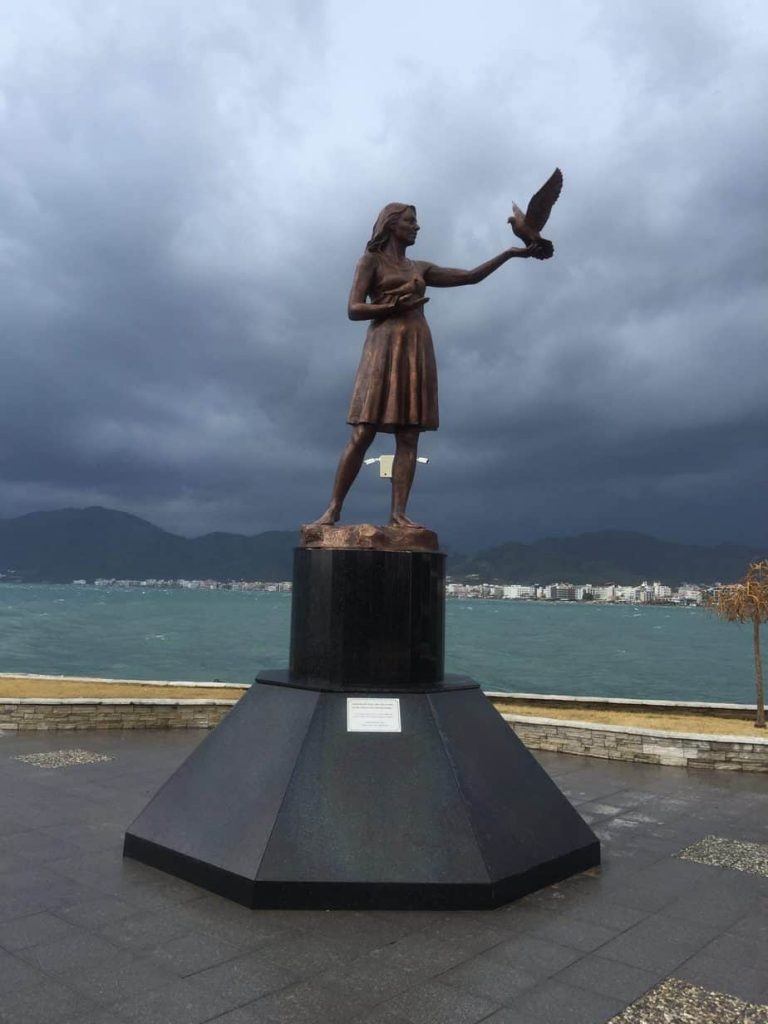 When we wake up, it’s dry. Windy, but dry! That may sound like good news, however, it is terribly frustrating when spending the night in a hotel instead of on the trail based on a weather forecast that predicts continuous rain showers.

I am beating myself up because of the weather. Again. Just like yesterday.

Rays of sunshine hit the pavement. 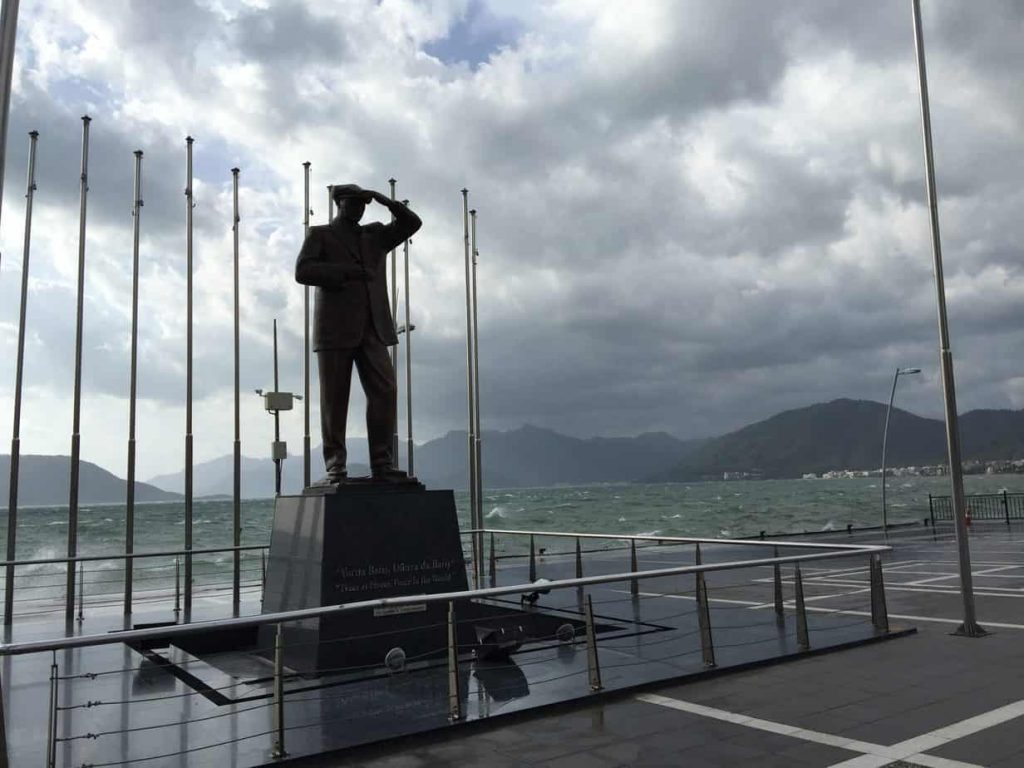 Coen, with a much less restless nature than I, has long surrendered to the circumstances. He wants to stay another two days here, in Marmaris. That’s too much to cope with for me. I’m betting on one day max.

We drink our coffee in the food court of the now all-too-familiar shopping mall. Thanks to the long day here yesterday and the reasonable Internet, I know ‘everything’ about Marmaris, including its detailed history. The castle on the far end of the bay, 2,5 kilometers from here, played a central part in some of that history. It stays dry and so we go for a walk to check it out. 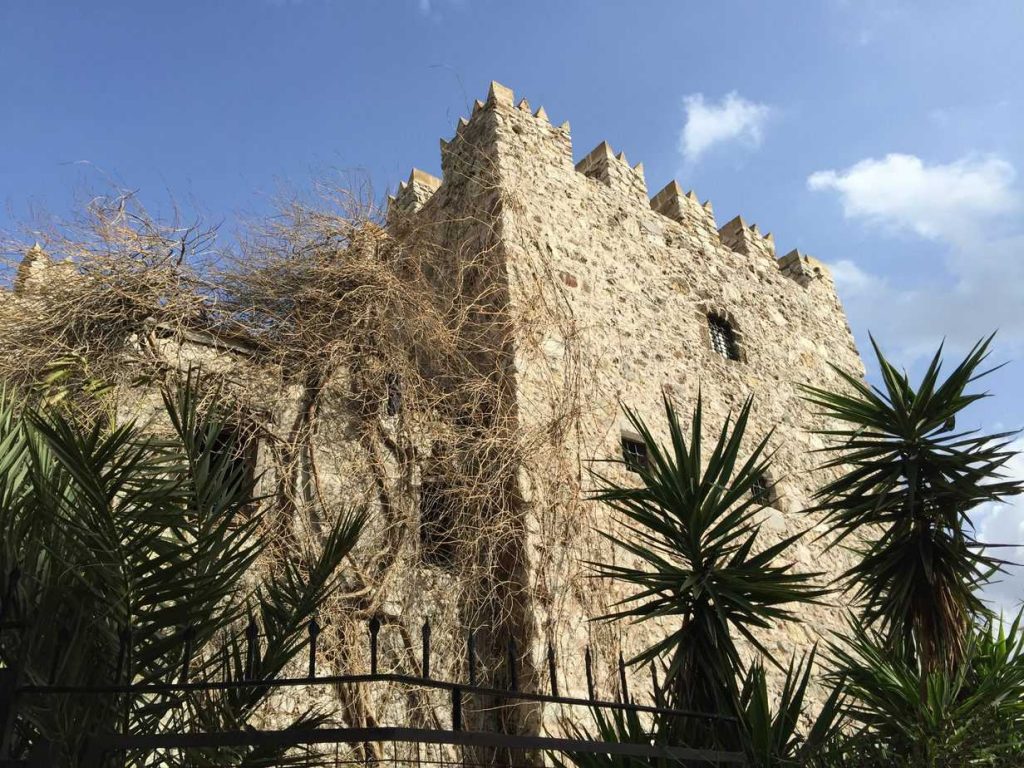 The Old Town and Castle of Marmaris

The shore shows the havoc wrought by the storms. The beach is littered with debris, chairs, and parasols that have been flying around. Beach-lined restaurants have damaged fences, terraces, a partially collapsed roof, and a section of a glass restaurant front is missing entirely. Some of the establishments are open; most are closed for the winter.

The wind is strong, pleasantly pushing us forward along the waterfront, as well as a kitesurfer who’s speeding across the white-topped waves that are crashing on the shore. 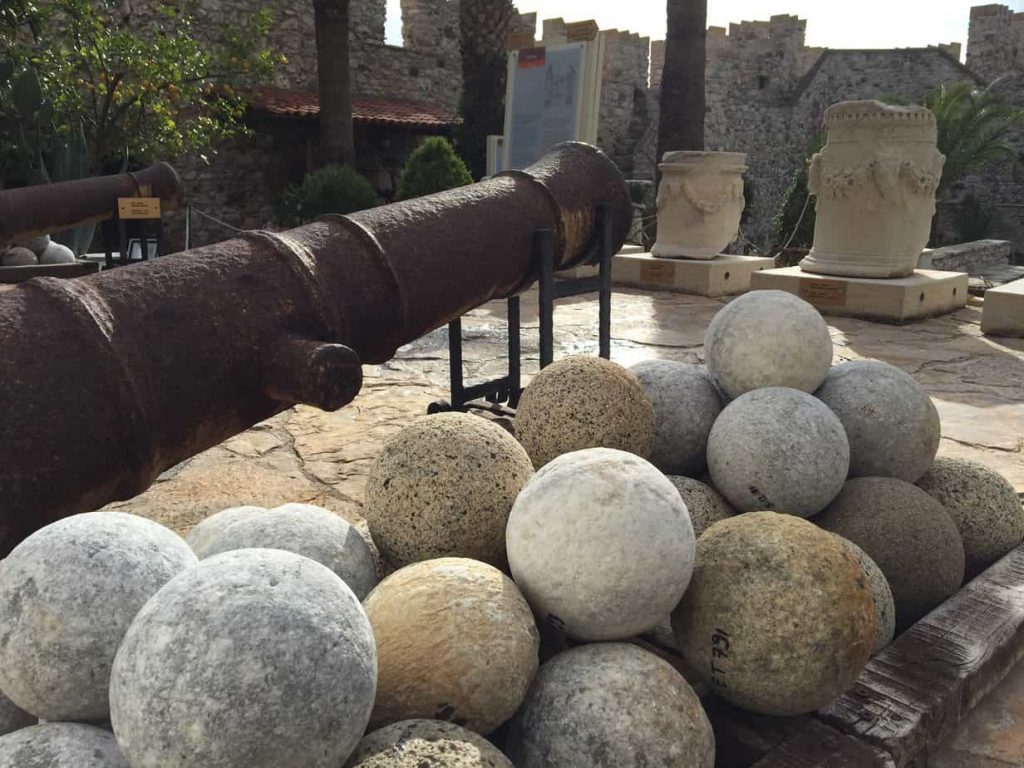 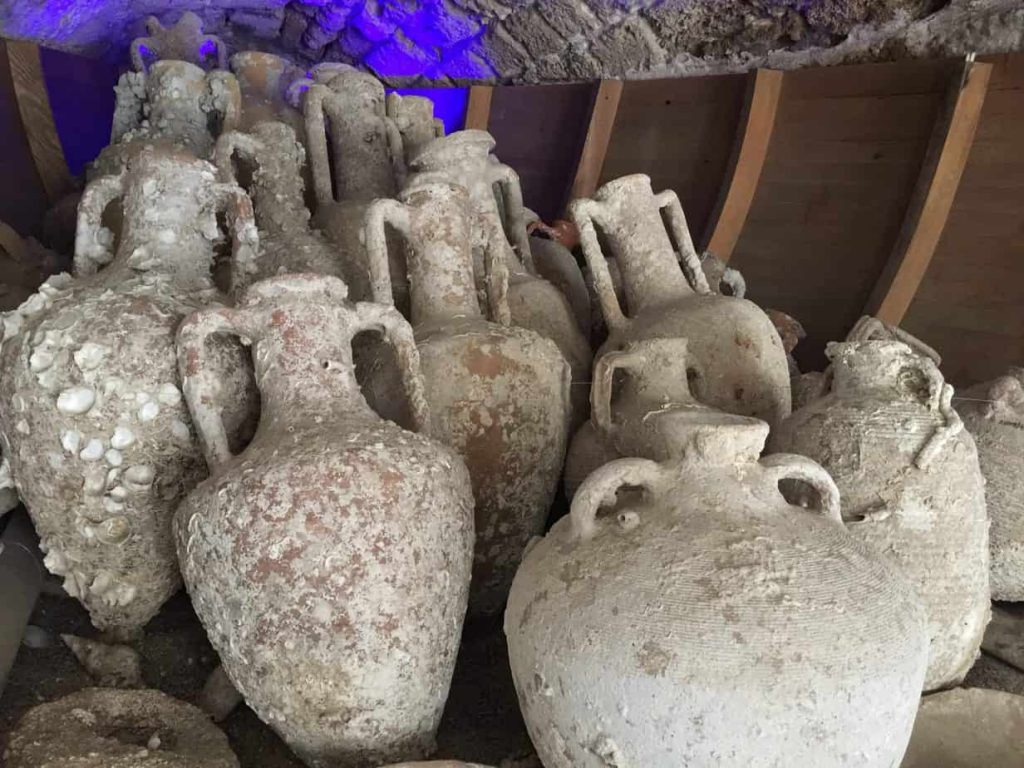 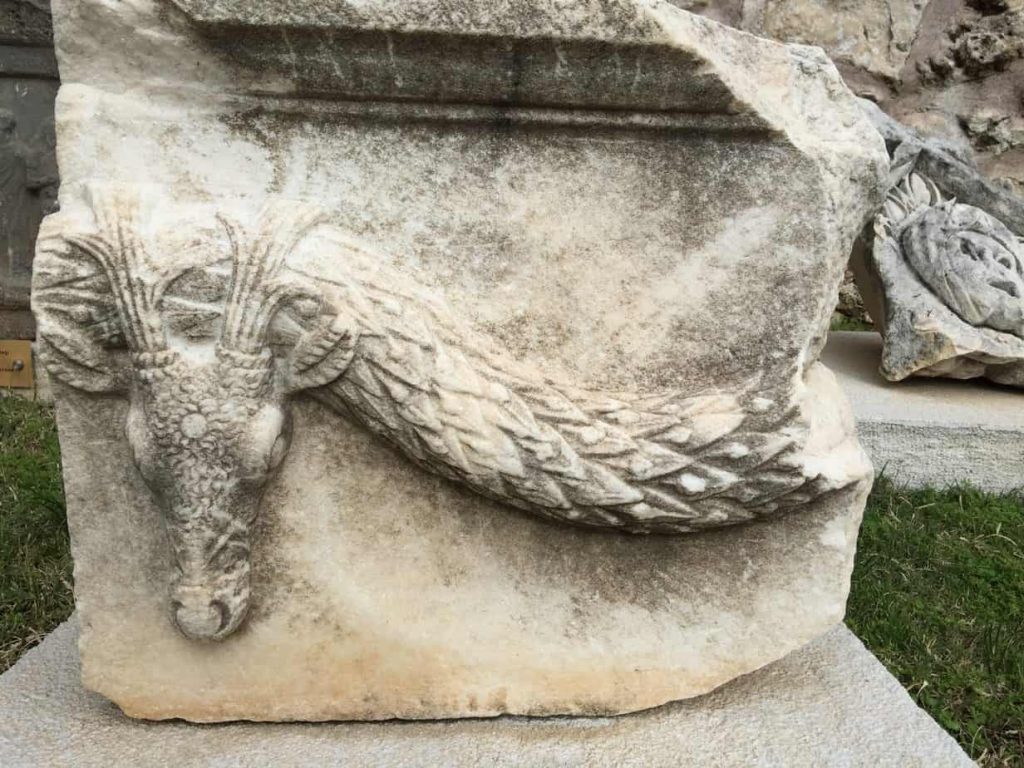 The castle is hemmed in by the old town consisting of narrow, winding alleys with small houses, cafes, shops, and restaurants. Now empty of people but still home to a zillion of cats that are clearly well-fed by locals, the neighborhood is nice to roam around for a bit.

I can imagine in spring and summer with flowers blooming the neighborhood is super scenic – if you can look beyond the crowds this place attracts during high season, that is. 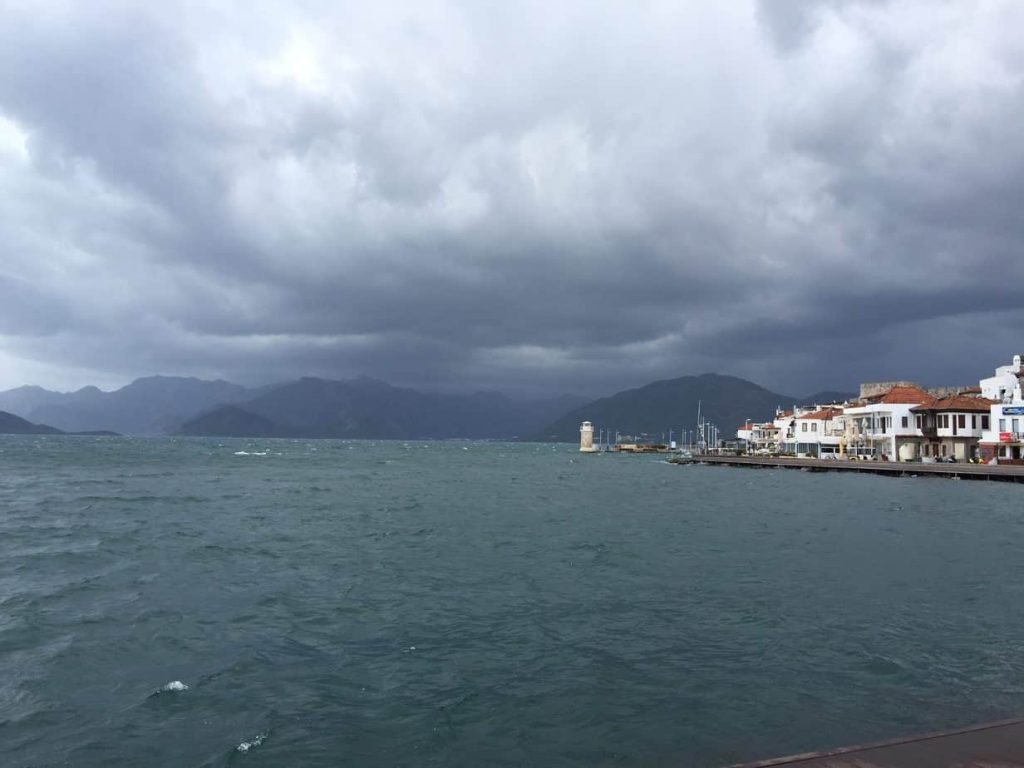 The History of Marmaris

In the past, the town and region were an important settlement of trade, conveniently located on trade routes connecting Egypt, Rhodes, and Anatolia.

The Ionians were the first to build a castle here (around 1044 BC) and Suleiman the Great had it rebuilt to be used as a base to conquer the island of Rhodes. It was largely damaged by the French in World War I. In 1990 the castle was renovated and turned into the beautiful and interesting museum it is today. 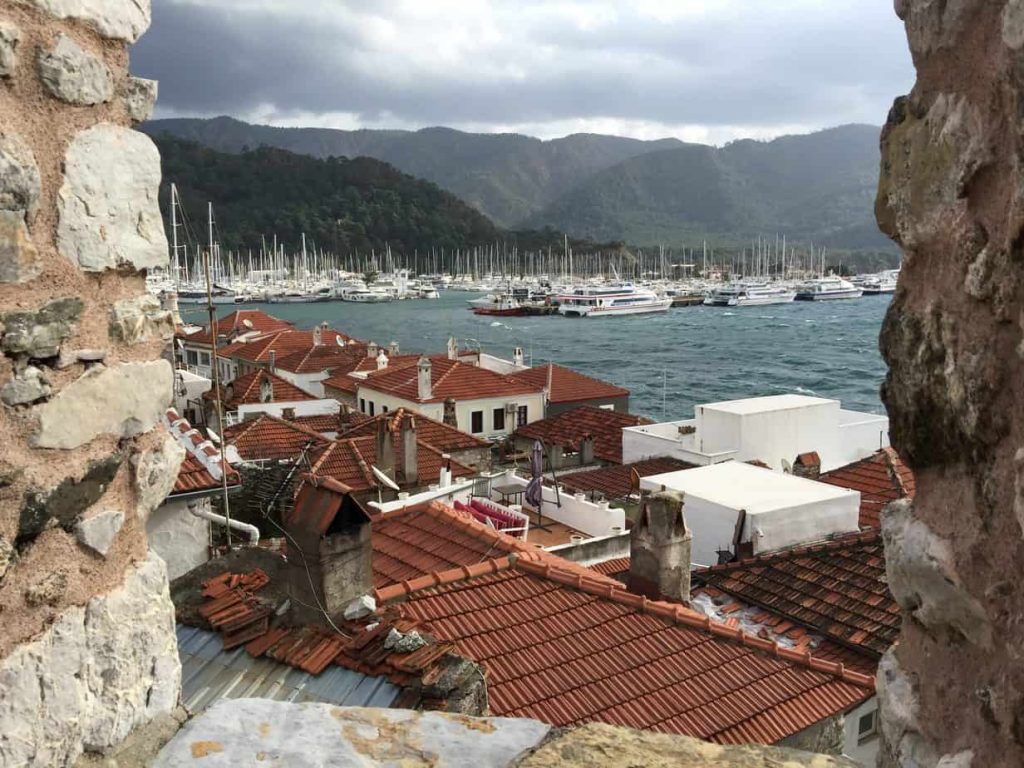 I was surprised to learn (through the Internet, not this museum) how many civilizations had conquered and been conquered here:

A good book on the sultan who ruled the Ottoman empire when it was at its largest is Suleiman the Magnificent; A Life from Beginning to End. It mentions, among other things, this castle from which he prepared his conquest of the island of Rhodes. 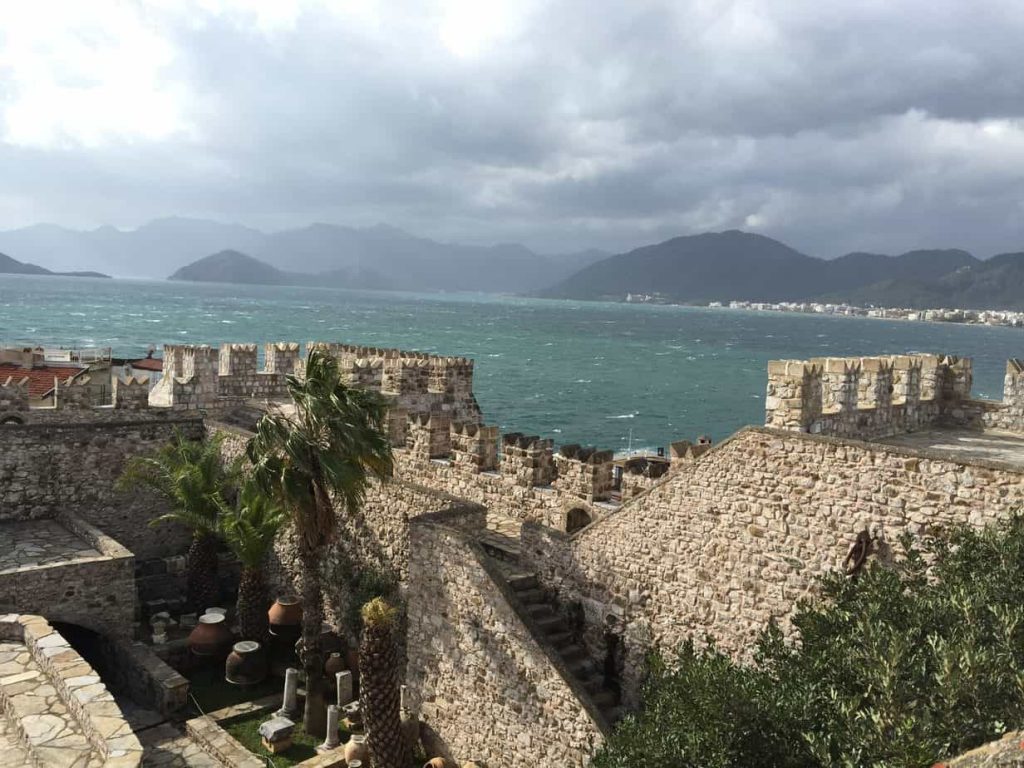 To Stay or Not to Stay?

From the castle walls we have fantastic views of the bay, the pine-forested hills, the harbor with incredibly luxurious yachts, the old town, and the new town.

While we are still occasionally warmed by a ray of sunshine, my obsession with the weather continues as does the battle inside my head: to stay or not to stay… My eyes frequently turn to the west: the mountains we want to be hiking in. Thunderous clouds are forming above them. Maybe it’s better we are staying here after all. 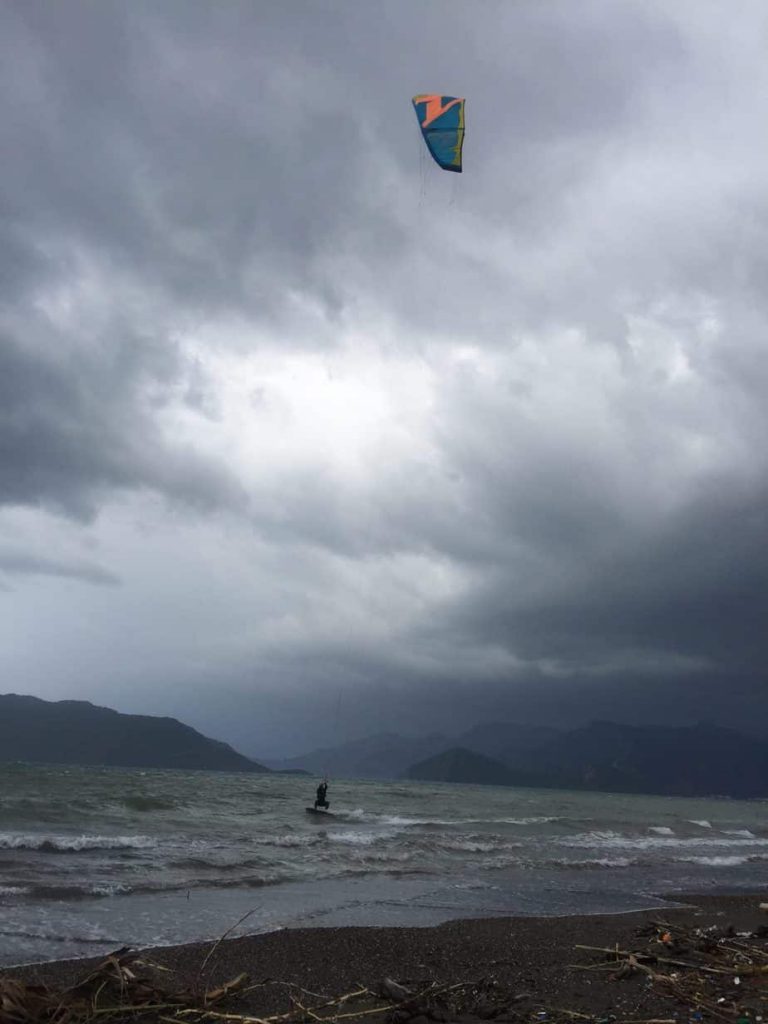 As we return our walk along the waterfront the wind increases, water splashing across the sidewalk with force. There is a relay box right along the waterfront behind a statue of Turkey’s founder Ataturk, its door open and somebody has plugged in a cable. That in combination with the splashing seawater doesn’t work well and we have a mini firework spectacle as the inside crackles and burns away in bright orange flames. 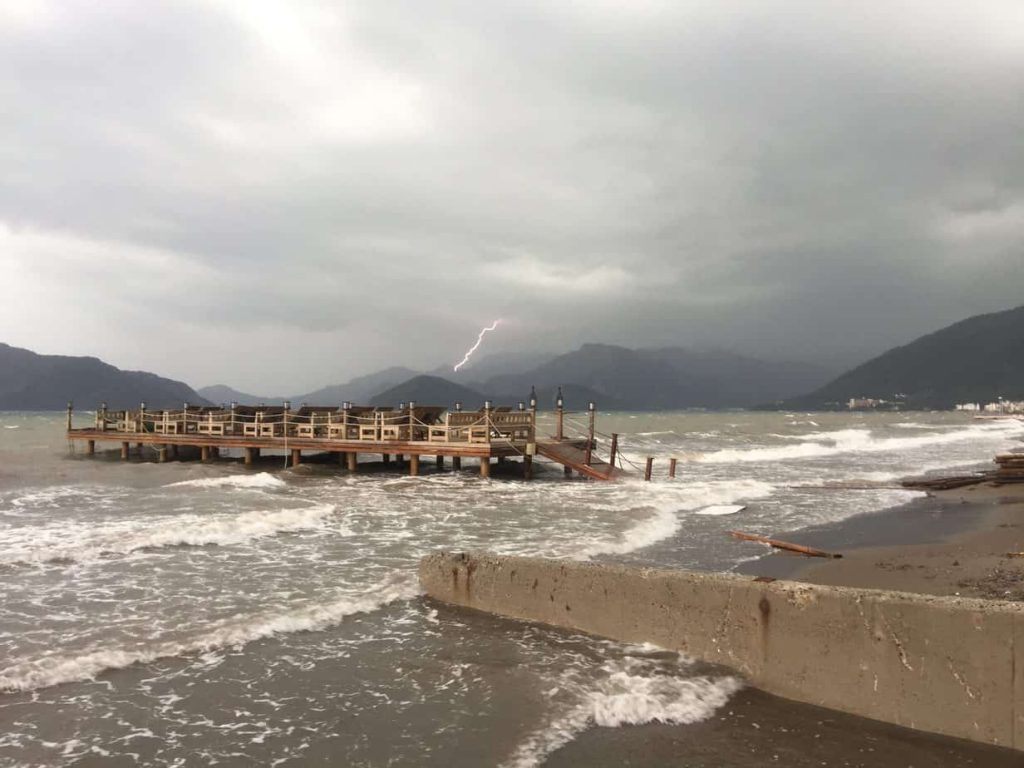 At last I’m at peace: we definitely don’t want to be hiking in those mountains now.

We return, once more, to the only sensible option in such circumstances: the food court, buying Turkish delights (sweets) along the way to go with yet another Americano.

Coen predicts we’ll be here tomorrow as well. I continue to be in denial. Tomorrow the weather will be perfect for hiking!

Update: At least, we’re on the trail – check out section 1, the Hiking the Bozburun Peninsula. 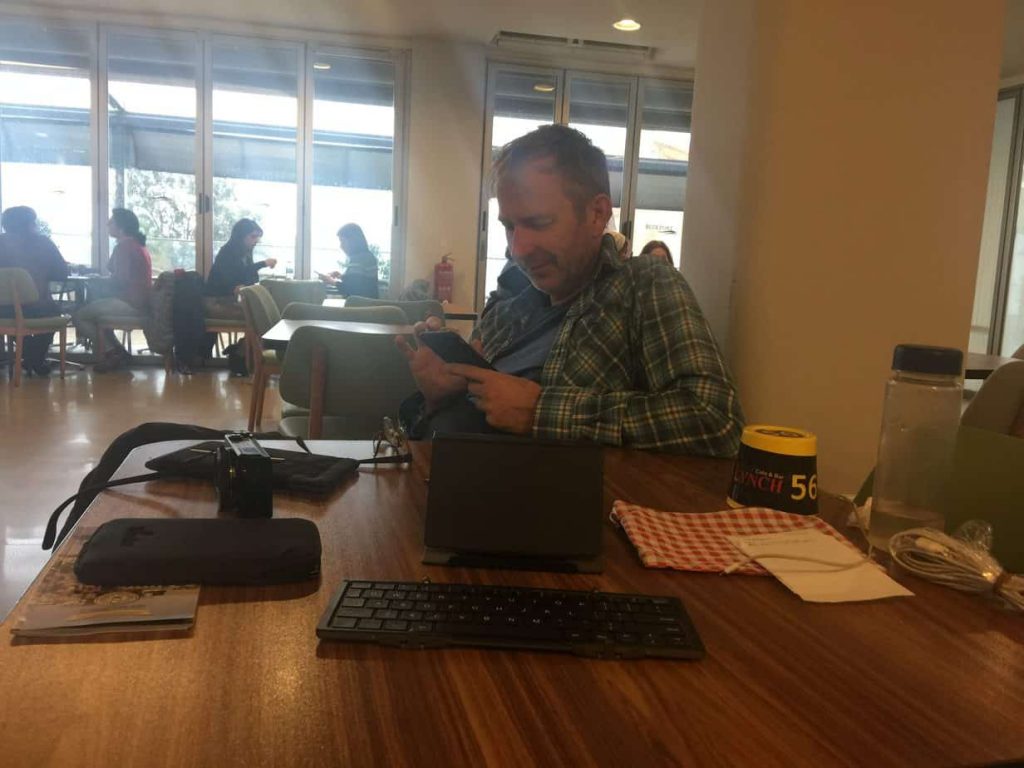 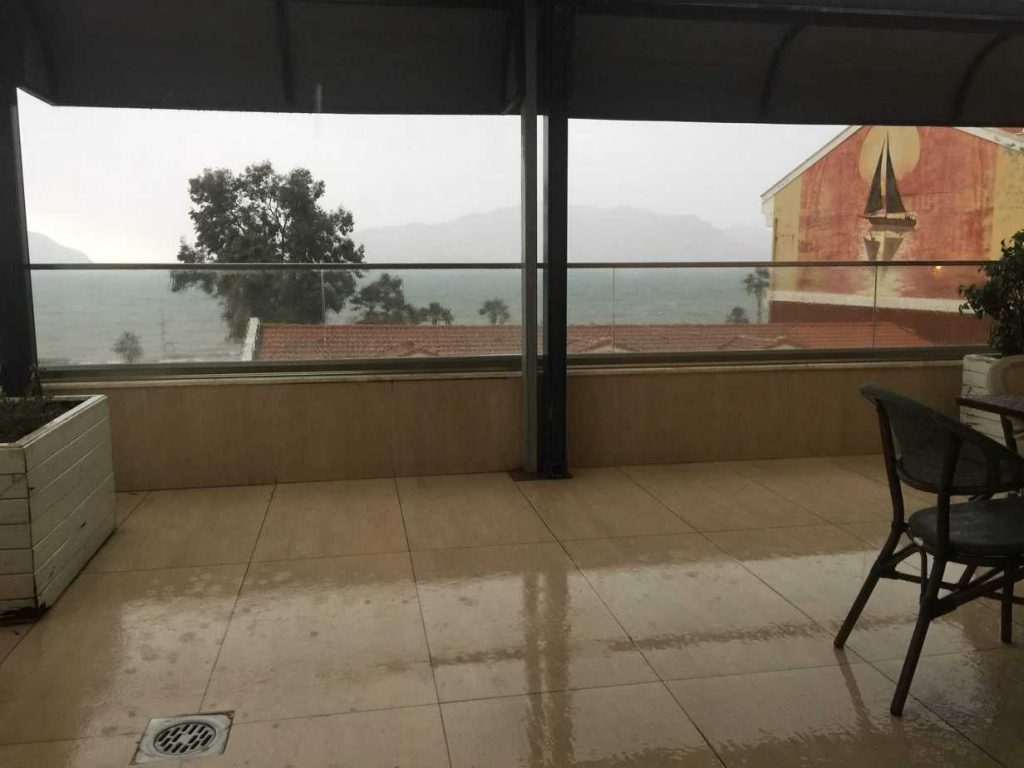 If we had stayed longer, we would have explored more. Ala, the Carian-trail hike had priority for us. But one day we may return to this region and explore more – I’d love to see the nearby island of Rhodes, for example. For those without their own transportation, there are a number of tours. Click on the images below to learn more.