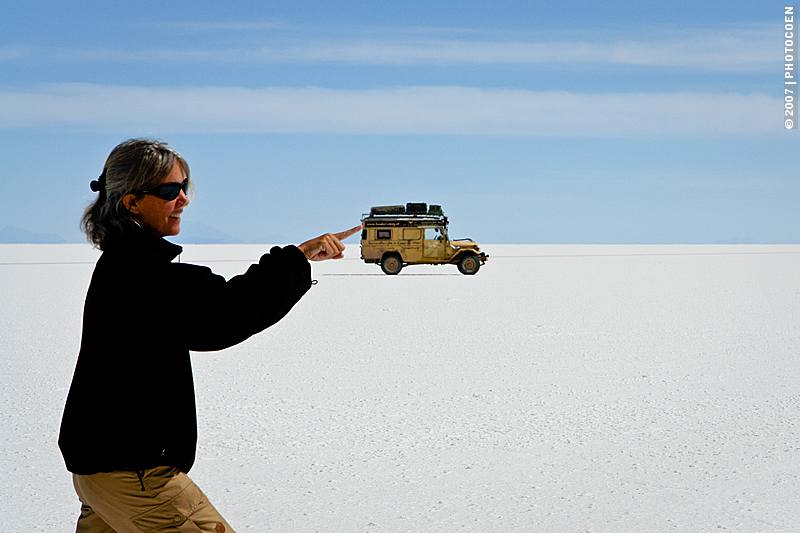 Hexagonal tiles of salt stretch to the horizon hemmed in by bluish mountains. The crunching of salt crystals beneath my feet sounds like stepping on fresh snow. I’m encompassed by total silence in an otherworldly spectacle that is largely devoid of life.

Salar de Uyuni is the world’s largest salt flat and is situated in the southwest corner of Bolivia. The town of Uyuni, characterized by guesthouses, overpriced tourist joints and tour operators, is the place to organize a trip to this salt plain.

Just beyond the central plaza are the local market and plain restaurants with plastic chairs and lit by neon lights. It is our favorite neighborhood to feast on a properly grilled llama steak, washed down with api (a white or purple corn-based drink) to warm our chilled bodies. 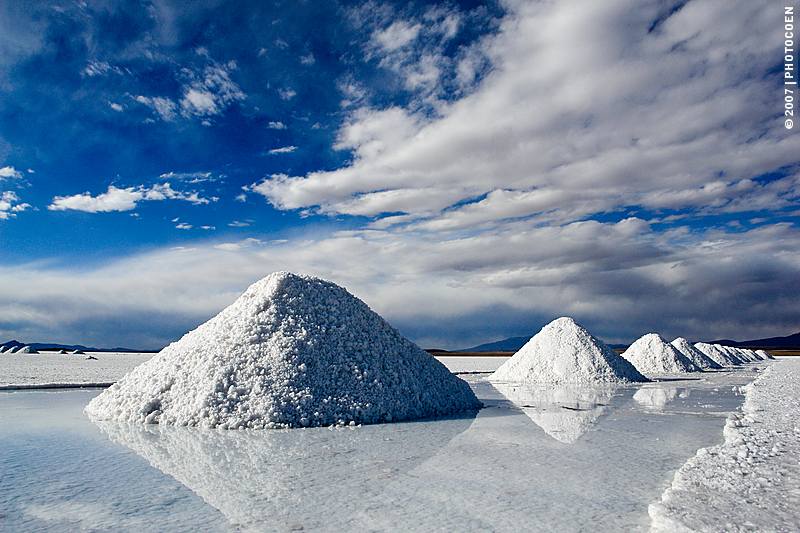 Colchani, a one-hour drive from Uyuni, is the main entrance to the salt plain. We watch the salt-extracting process; rows of salt pyramids reflected in water make for spectacular images.

Unsure about where to go, we follow a couple of Land Cruisers owned by tour operators with whom most travelers book a trip to the Salar. Buses ply regularly across the salt plain to Llica, which probably gives a more ‘authentic’ travel experience. However, the bus won’t stop in the middle of this white ocean for you to take pictures and, trust me, you do want to play with your camera here. 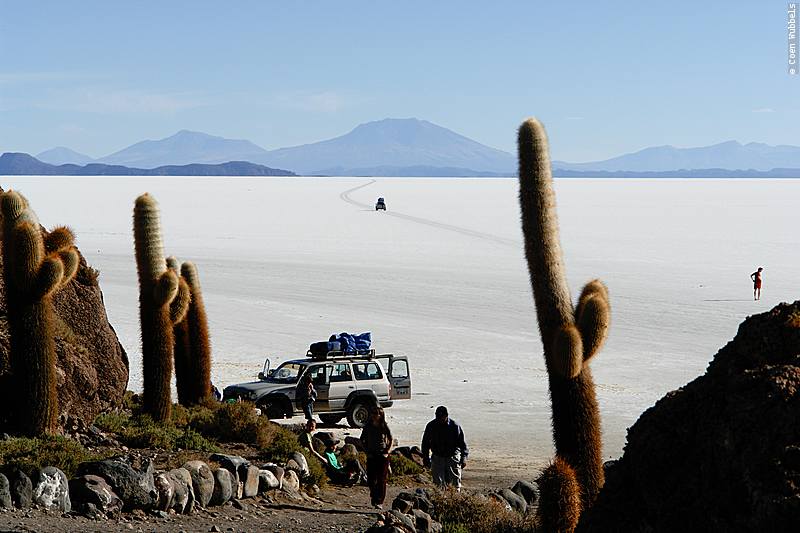 On the plain stands Hotel Playa, entirely constructed of salt blocks, which is well worth a look. But we prefer spending our time on the volcanic-rock-covered island of Isla Inca Huasi (commonly misnamed as Isla de los Pescadores). We hike the thirty-minute trail around the island, spot two vizcachas – rabbit-like rodents with a long tail that hop like kangaroos – and take in the view.

I feel dwarfed by the magnitude of this desolate landscape, but also by the twelve-meter high Saguaro cactus next to me, which is the tallest cactus on these plains. You can calculate how old it is, when you know it grows one centimeter per year.

Back on the salt Coen locks the cruise control at fifty miles per hour and lets go of the steering wheel. Nothing happens. We drive straight ahead, seemingly forever, on the best road of Bolivia, over billions of tons of salt deposits interlaced by a network of the tiniest fissures. Distances are deceptive. You think the next island is just a short drive away, but it may as well be fifty kilometers. 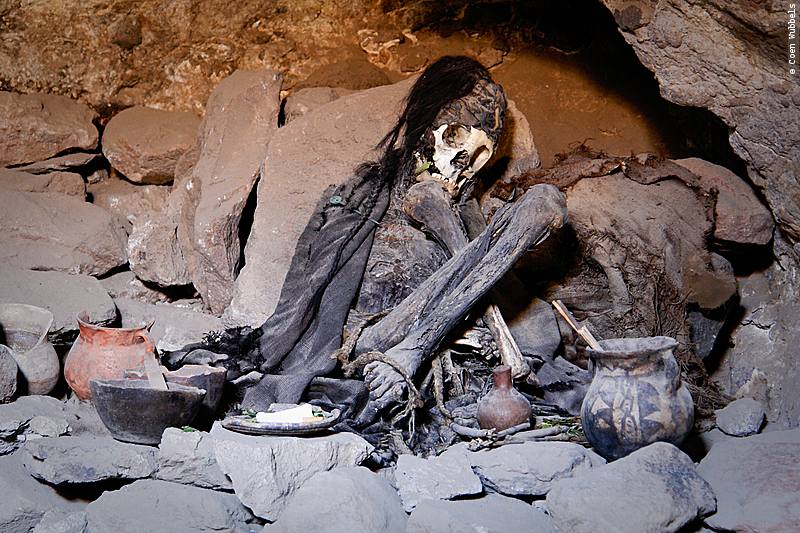 On the other side of the lake lies Colquesa, whose inhabitants mostly have left for towns for economic reasons. Along the edge of the lake flamingos scratch around in the salty soil. Llamas chomp on tufts of yellow grass and have red or pink strips of cloth tied to their fur, denoting ownership. We toil up the path that winds around the Tunupa Volcano. Some visitors hike all the way to the top but we stop at a tiny green door that has been constructed under a cliff.

In the village we’ve been given a key; it fits. We bend over deeply to enter, not only to pay obeisance to the spirits but also to avoid bumping our heads. In the cave are three mummies, lit by a ray of light filtering through a fissure. The mummies are honored with coca leaves, partly smoked cigarettes and two empty liquor bottles – all popular offerings in Bolivia.

We return the key and set up camp on one of the solitary islands. Only the moon illuminates the white surroundings. It is as if we are floating on an ocean – an incredible, surreal scenery. We are camping in the most spectacular spot in the world. 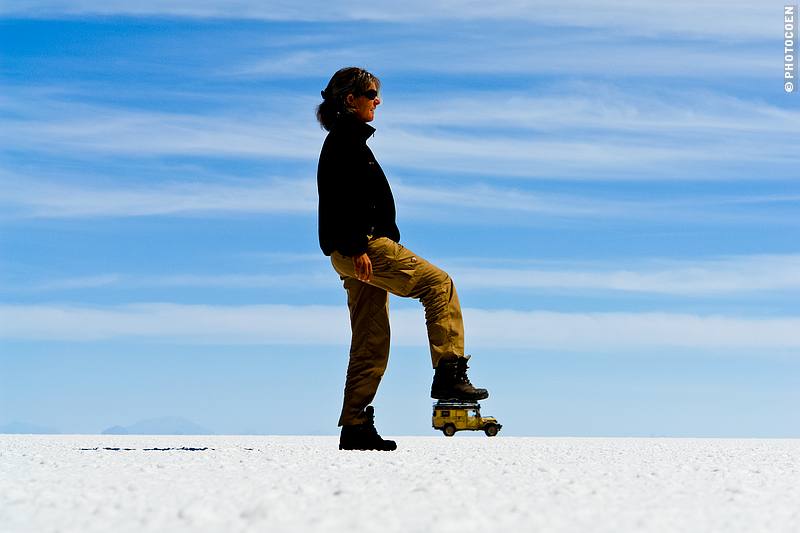 2 thoughts on “Driving on Salar de Uyuni in Bolivia”