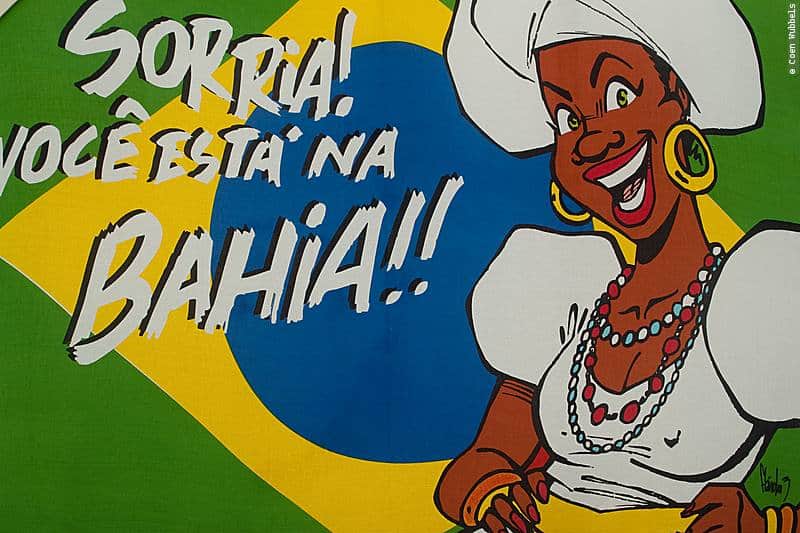 Amidst a crowd of typical, T-shirts-and-jeans-wearing Brazilians, a black woman stood out. She wore an intricate, white, lace bodice covered with necklaces above a dark-blue, billowing skirt and a white piece of cloth artistically wrapped around her head. She was deep-frying some sort of snack. I had just arrived in Salvador da Bahia and was as yet unfamiliar with Salvador da Bahia’s famous Baianas de Acarajé.

Food at the Tabuleiros do Acarajé

I quickly learned because I found the snack at many food stalls, the so-called tabuleiros do acarajé. The incredibly dressed vendors simply worked as a magnet: I wanted to see them from up close.

The snacks, called acarajé, worked as a perfect energizer between route-marching round Salvador da Bahia’s sights of colonial churches covered in layers of gold, museums on art and history and a number of impressively maintained old houses and mansions. 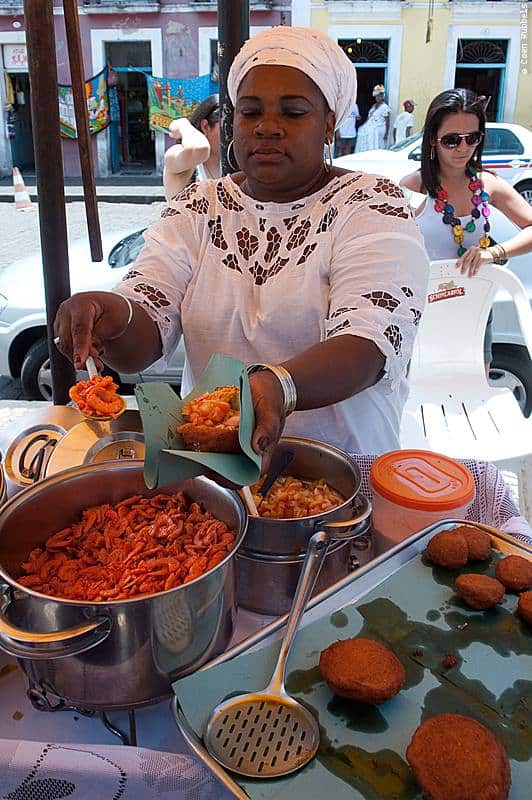 The snack is typical of Bahia, a coastal state in northeast Brazil that flourished during colonial times because of the sugarcane plantations. It is not just any deep-fried snack, but one with a history and traditions that date from the time of slavery.

Aracajé is a mixture of mashed black-eyed beans, onions and shrimp fried in dendê (palm oil). According to local custom, Baianas de Aracajé pour spicy pastes, vatapá and caruru over the aracajé after they have cut it in half, but in the tourist areas they generally ask foreigners whether they like this or not. The snack is topped off with a salad. 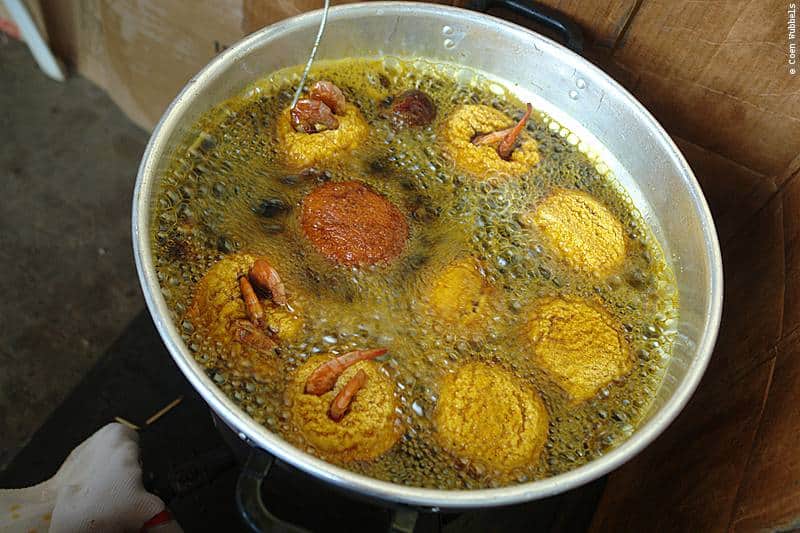 The snack was brought to northeast Brazil by slaves from western Africa. During slavery, aracajé was sold in the streets of Bahia by freed female slaves. Apart from being a daily snack aracajé was, and is, offered to the saints and gods during religious candomblé ceremonies.

Aracajé cannot be prepared by just anybody. Since it first appeared on the scene, the snack has been made and sold by women only, a tradition kept until today. With this tradition comes the vendor’s fancy dress that also dates from the time of slavery, and which continued to be a common dress in Bahia until into the 20th century. Nowadays the Bahian dress is only worn during festivals, by women in the streets of Salvador da Bahia to lure tourists into their shop, and by Baianas de Aracajé. 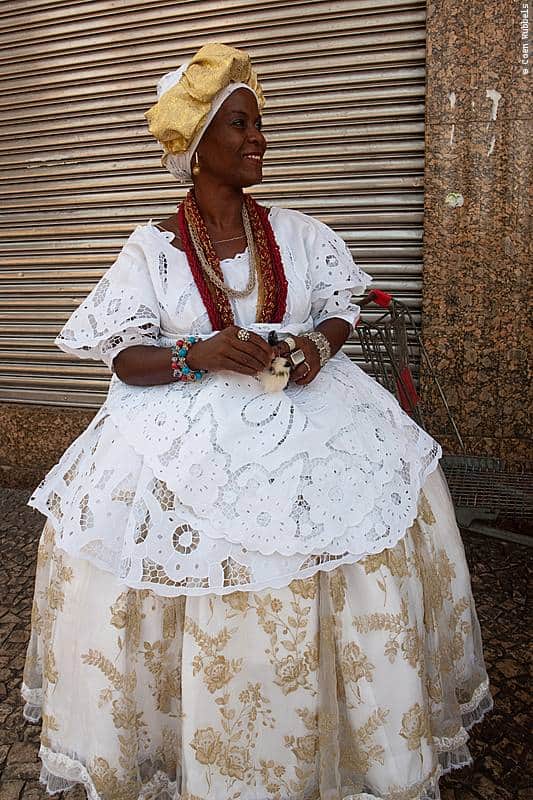 There is a museum downtown Salvador da Bahia dedicated to the Baianas de Aracajé, which turned out to be the perfect place to learn more about their costume.

The elaborate, multi-layered dress is a reminder of baroque Europe, while the headdress is related to the slaves’ Afro-Islamic roots, where turbans are a usual part of the local dress. The type of texture, the weaving technique and the colors of the costume used to identify the religion, the ethnic background and social status of its wearer. Whereas it may now come in a variety of beautiful printed fabrics, the dress of the Baianas de Aracajé is traditionally white.

The dress consists of various layers: 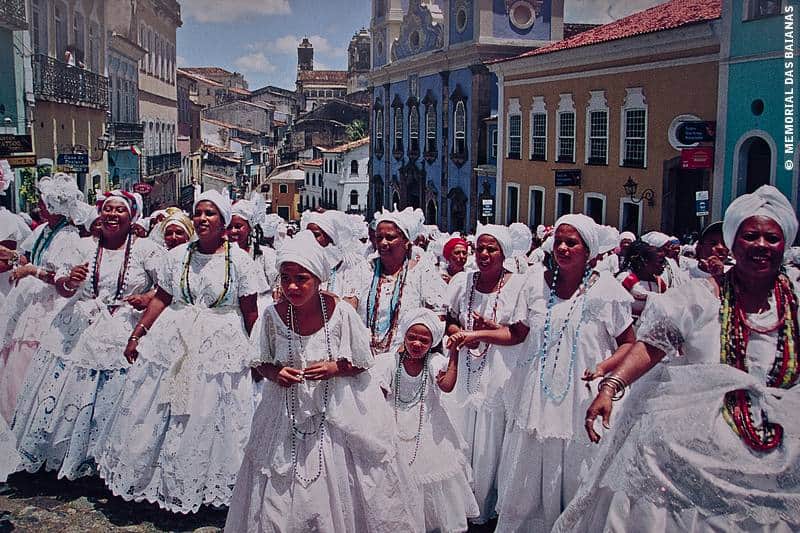 Going out for aracajé is a long-standing Bahian tradition with families going out at night to savor a tasty aracajé. In Salvador da Bahia each neighborhood has its own tabuleiro do acarajé. Some are equipped with just a kitchenette where you eat standing up, whereas others have extended their stalls with wooden benches and trestle tables covered with lace cloths. Sometimes you’ll find aracajé food stalls elsewhere in Brazil as well, most notably in Rio de Janeiro.

According to my host, a lifetime resident in the city, the most acclaimed tabuleiro do acarajé in Salvador da Bahia is Casa da Dinhi do Acarajé, which – apart from serving an excellent aracajé – stands out for its colonial setting. The founder of the tabuleiro passed away in 2008 and the business is now run by her family.

In 2005, the Oficio de Baianas de Aracajé (the working area of the aracajé vendors) was recognized by Brazil’s Instituto do Patrimônio Histórico e Artistico Nacional (IHPAN) as an Immaterial Patrimony of Brazilian Culture. 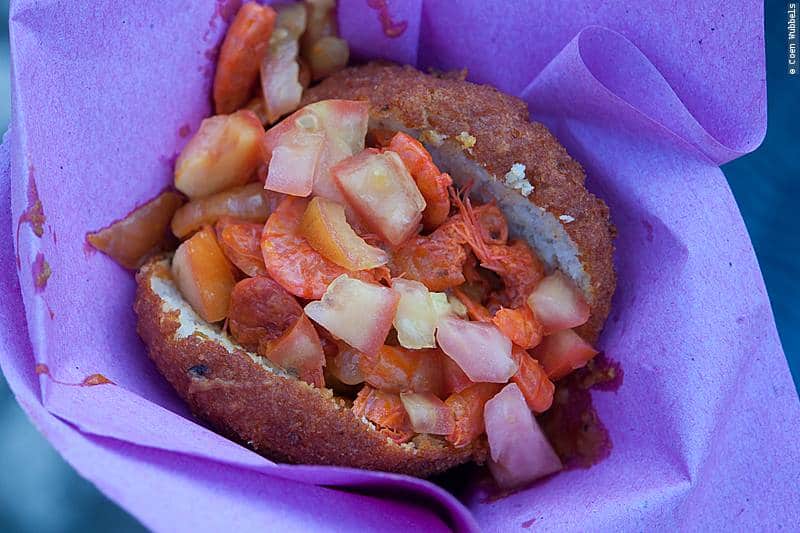 Salvador da Bahia is a UNESCO World Heritage Site and has an amazing number of places to visit and explore. Of course you can do so independently, but a tour or guide may add to the experience, knowing exactly where to take you.