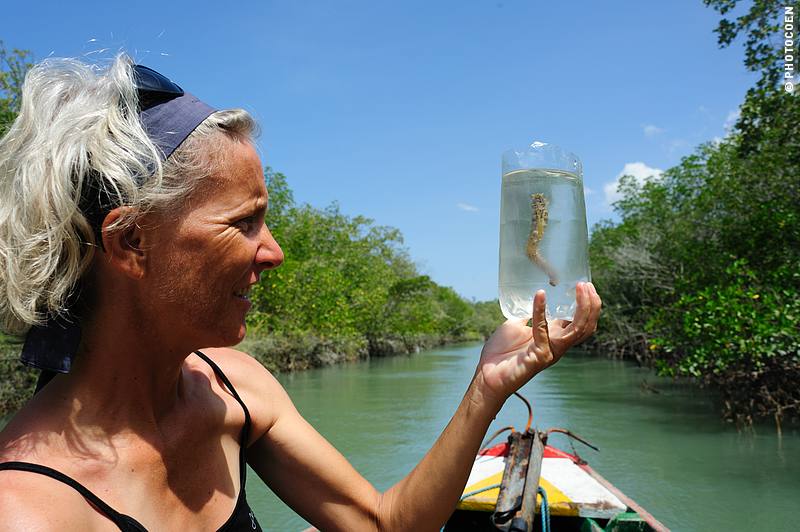 In wonder I stare at the gray-colored seahorse. I can’t remember ever having seen one before. No matter how I turn the bottle, the seahorse keeps its head turned from me. Later the opposite happens with another one and I figure that maybe they prefer facing` towards the sun.

The marine fish is about ten centimeters long, the longest we’ll see today. It’s utterly delicate with a tiny fin on the back of its segmented bony armor and a tubular snout that is almost transparent.

According to Wikipedia “Seahorse is the title given to forty-seven species of marine fish in the genus Hippocampus. “Hippocampus” comes from the ancient Greek hippos meaning “horse” and kampos meaning “sea monster”.

I understand the reference to the horse, but what is or was so monstrous about them to give the species this name?

The seahorse curves its body in elegant motions to move around but keeps on bumping its head against the plastic bottle. It can’t go anywhere and after a couple of minutes I set it loose, back in the mangroves.

Our guide Estevalda uses a long pole to push us off shore again, bringing the boat to deeper water and pushing it farther upstream. It’s peaceful here. The sun shines brightly yet not too fiercely because there’s a breeze. Silence reigns but for the pole being pulled out of the water, the wind and, in the distance, the surf of the Atlantic Ocean.

Man-powered boats are a bliss; no roaring outboard engines. For a moment I wonder why these engines haven’t penetrated this fishing village yet, but then conclude I do not really want to know. Instead of having a discussion with our guide about engines I prefer to focus on being here, absorbing the peace and quiet, and finding more seahorses. 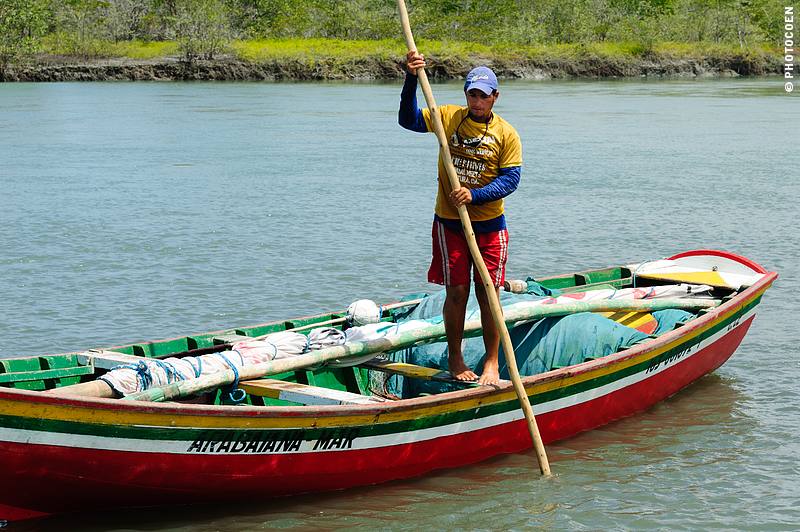 I don’t spot any but Estevalda with his trained eye does. He picks up a young one, yellow. It’s stunningly beautiful and I take a moment to take in its features and details before setting it free again. Estevalda tells us that it’s the male that gets pregnant and that one pregnancy produces as many as 700 young ones. Few will reach adulthood. Later I read on the website of Endangered Species International that it is still unknown how long seahorses live and that most of their natural history remains mysterious.

Estevalda points out one of the predator fish that feeds on seahorses. “That’s why the seahorses hide among the roots of the mangroves, they have a higher chance to survive there.”

Apart from seahorses we see different species of crabs: black and grey ones that are like chameleons against the grey mud on which they run around. By contrast, there are many conspicuous bright red ones as well with black eyes on stalks. Easy to spot, easy to catch and popular to eat.

Seahorses aren’t eaten and Estevalda tells us that they are on the list of endangered species. It is not allowed to catch them, the most common purpose of which would be to dry them so tourists can buy them (in China they are apparently used for medicines as well). Once again I realize the absurdity of these kinds of souvenirs: to kill a living creature and keeping it behind glass in a home that’s not natural to the species, instead of enjoying it as it is and where it is.

Estevalda is one of the guides that doesn’t allow tourists to pick seahorses out of the water (others do, unfortunately). “Touching them with sun lotion on your hands is enough to kill them,” he says. He swiftly picks one up from a mangrove root, puts it in a pet-bottle filled with water and hands it to us.

The peace and quiet, the weather, the lovely landscape of blue water, grey mangroves, green vegetation, a variety of small animals like crabs, fish and birds, the rhythm of Estevalda’s pole hitting and exiting the water, his quiet voice talking about these marvelous, unique creatures all make it a special moment on our journey. 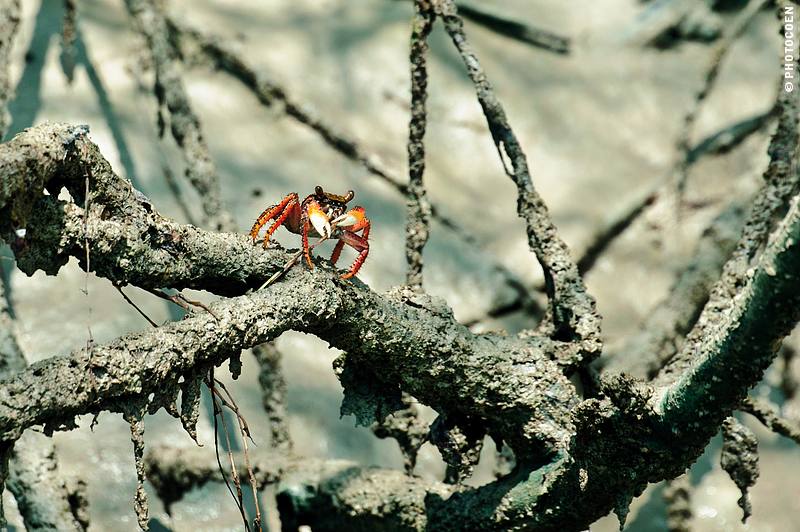 We watched these seahorses in the mangroves of Guriú, some 10 kilometers west of Jericoacoara or 10 kilometers east of Tatajuba (in both places you can organize a tour or buggy ride to Guriú), along the coast of northeast Brazil (state of Ceará).

Best chance to spot seahorses is during low tide. Price is 10 reais per person (Estevalda said we wouldn’t have to pay if we didn’t spot any seahorses but I don’t know if all guides do this).

Enjoy more stories:
Why 5 Days on the Road Instead of 5 Hours? – Slow Travel in Ecuador
Tips on Learning a Local Language
Hiking the Bozburun Peninsula (Carian Trail, Turkey)