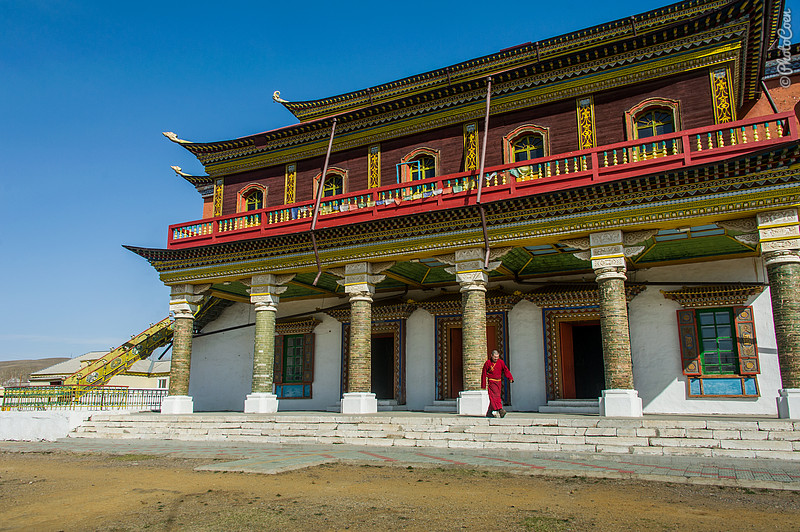 Why would you drive 250 kilometers to see a monastery? It was one of those moments of looking at our roadmap after having read a mere paragraph in a guidebook and this voice inside my head saying, “Let’s go.”

Always listen to your inner voice!

So we turned off the main highway from Khabarovsk to Chita and headed south, driving deep into the countryside. Taiga made way for vast, undulating grasslands. The first cows and horses grazing the plains announced spring, at last – it was the end of April. Asphalt turned into gravel except in villages where roads are asphalted to spare citizens and homes thick layers of dust.

The journey brought us to a lovely camp spot along the river. It was so nice and the weather for the first time so pleasantly warm that, in fact, that we stayed and camped an extra day. Just lingering, reading books, drinking coffee, doing some minor chores. It was tempting to stay yet another day, however, the road called plus we a meeting was scheduled for that same evening in Chita, a 260-km drive. 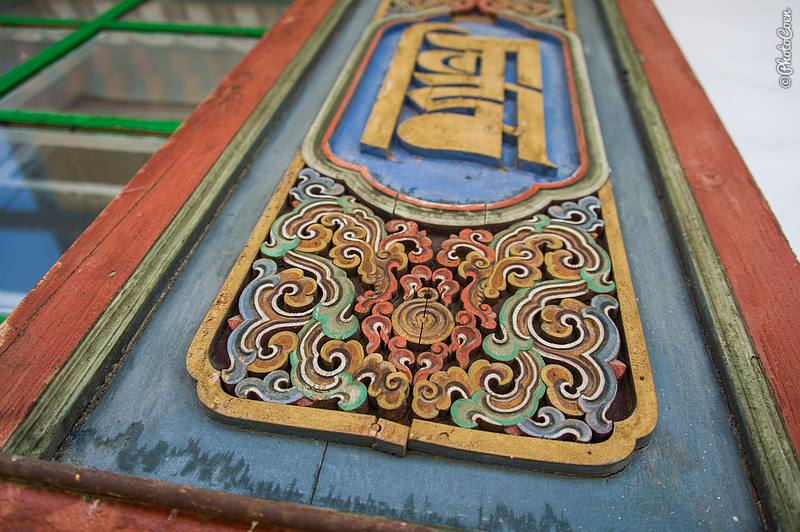 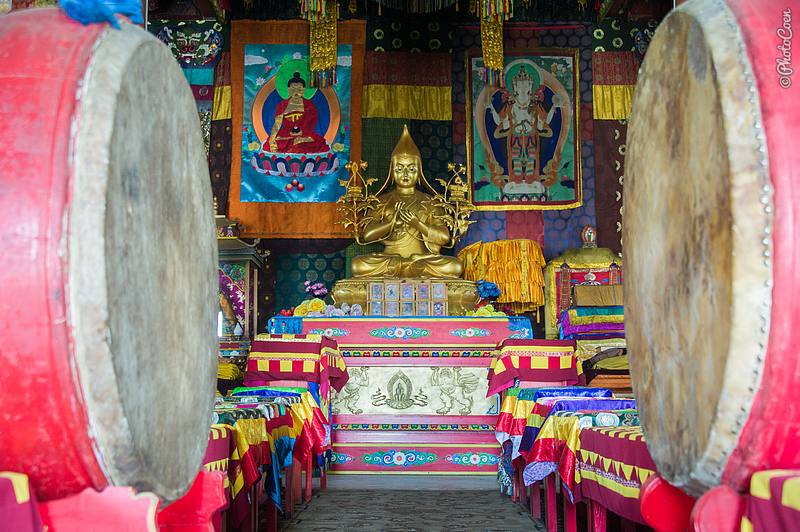 A few kilometers down the road was the monastery – Tsuyol Datsan –, some two kilometers from the holy Onon River. On arrival we knew right away that, yes, this had been worth the detour. What a marvel. What colors. What an extraordinary sight to find such a Buddhist monastery in a country ruled by the Russian Orthodox Church.

Fortunately, it was open to visitors and in our few words of Russian we asked for permission to enter the monastery. It is inhabited by 5 or 6 monks, dressed in red robes, but for big ceremonies there may be as many as 20, one of them told us.

The monastery is, I understood from the one guy who spoke a bit of English, of the Mahayana Branch of Buddhism. Inside the main temple with wooden upper façades and tilted roofs we spotted a Yellow Hat, signifying the branch that the Daila Lama belongs to. 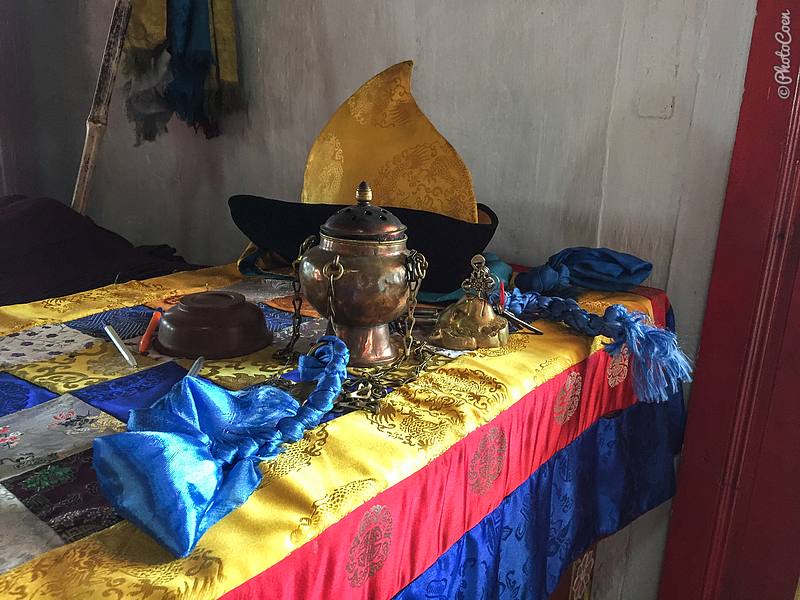 It reminds me of…

We recognized the sign with two small deer on top of the entrance from temples in Korea, as well as a drawing of the Heavenly Kings. A massive, gold-colored Buddha temple in a smaller building reminded us of a similar one we had seen in Leh, Ladakh, including stairs to a second floor where you can walk around the statue at the level of its head. The shininess of the statue, on the other hand, reminded us of Thailand. And, in the main temple hung a poster of a mandala painting that is so characteristic of temples and monasteries we have seen in Sikkim and Tibet.

About the mandala painting: it has a detailed section representing hell, with horrific acts such as people being boiled in a cauldron, very similar to paintings we have seen in some churches, in particular in Peru near Cusco. 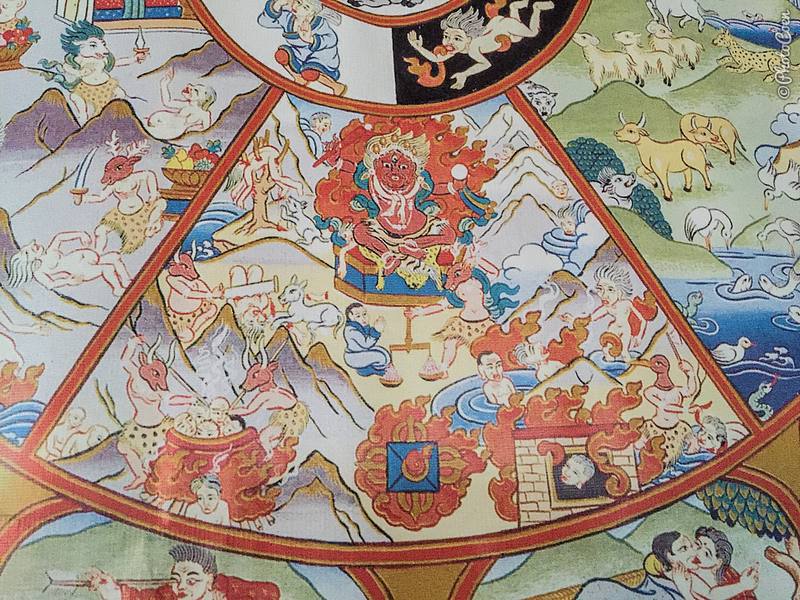 Depiction of hell, very reminiscent of depictions of hell in churches.

What we had not seen before in a Buddhist temple, or can’t remember, were wooden panels on the floor, two in front of the main temple, one in front of a shrine in the back, and one or two inside. We think they are for devotees to prostrate themselves on. On the boards lay two wooden blocks the devotee can pick up which will help him/her glide across the board to lie down on the ground full-length with their arms stretched in front of them, tapping their forehead on the ground. 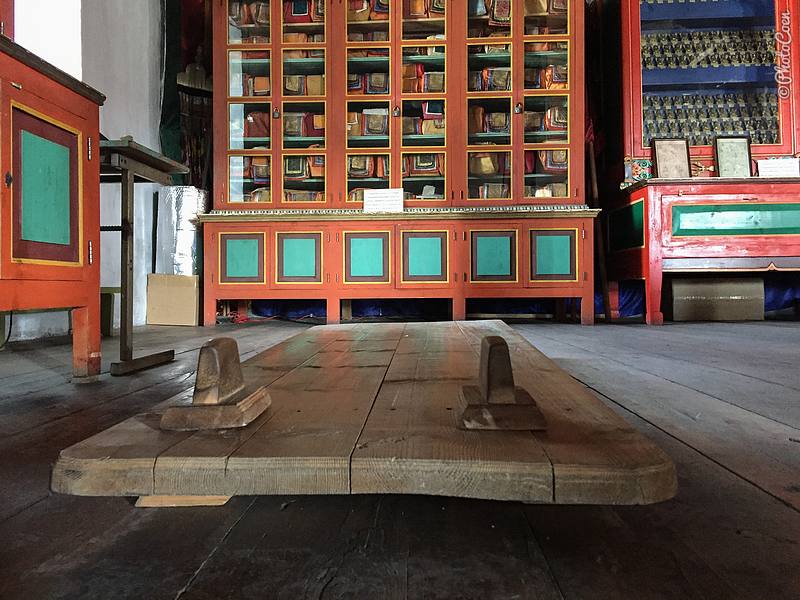 As we were about to leave, one of the monks, Alexander, invited us for tea. We followed him to a building on the side into a room with long benches and tables full of biscuits, bread, jams, butter, cookies, snacks. A woman in the kitchen prepared soup and pasta for whom wanted and we drank tea while chatting in our two words of Russian with the men of whom one spoke ten words of English.

This is how such a conversation unfolds, more or less,

I had wondered how this complex could have escaped the onslaught of all places of worship during the destructive 1930s. Maybe this one was destroyed and rebuilt, maybe not. I have no clue. 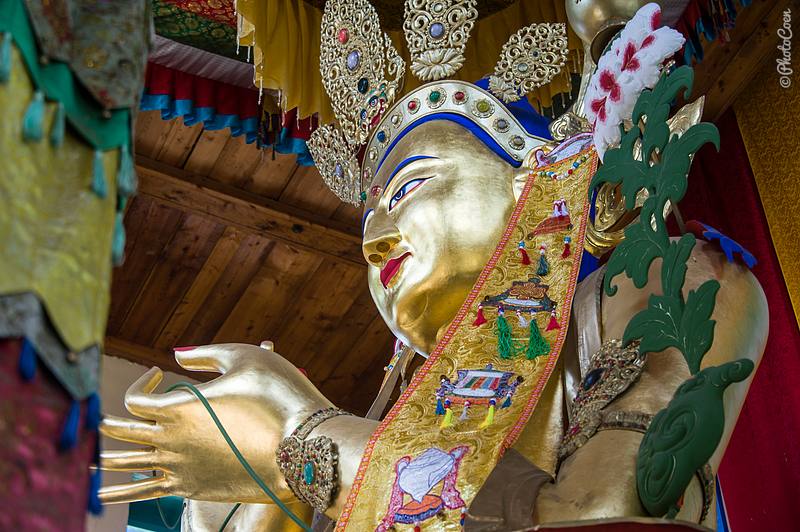 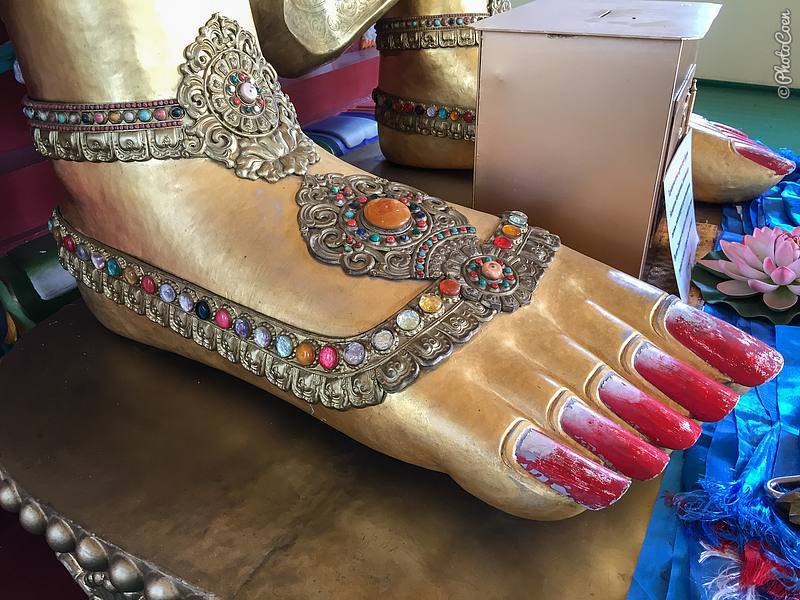 We then talked about the big painting on the wall: grasslands with grazing camels, horses, sheep, goats and cows. I asked if they still had camels in Russia.

He, But not wild camels.”

So I still am not sure whether there are camels here in Russia, but if so, most likely not wild.

It doesn’t matter. We’re used to these kinds of confusing conversations. We should simply work harder on learning Russian. 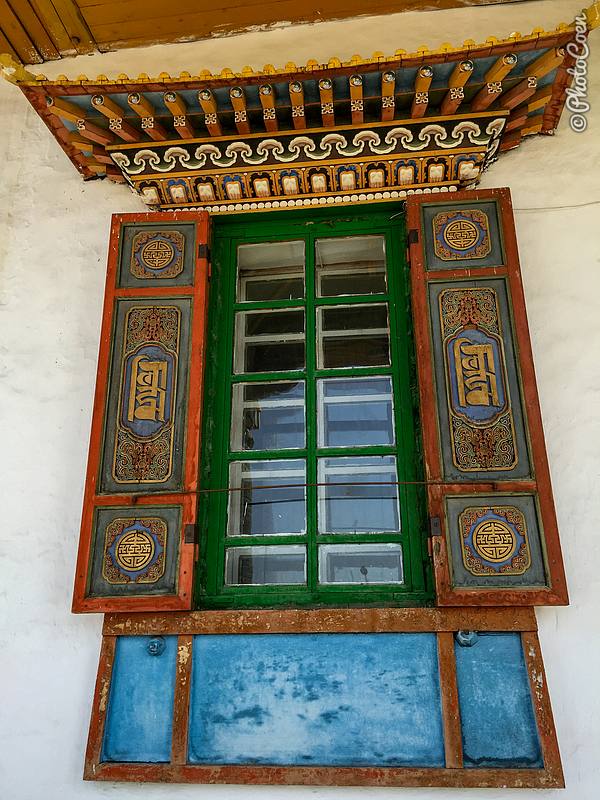 4 thoughts on “Visiting the Tsugol Monastery in Siberia (Russia)”