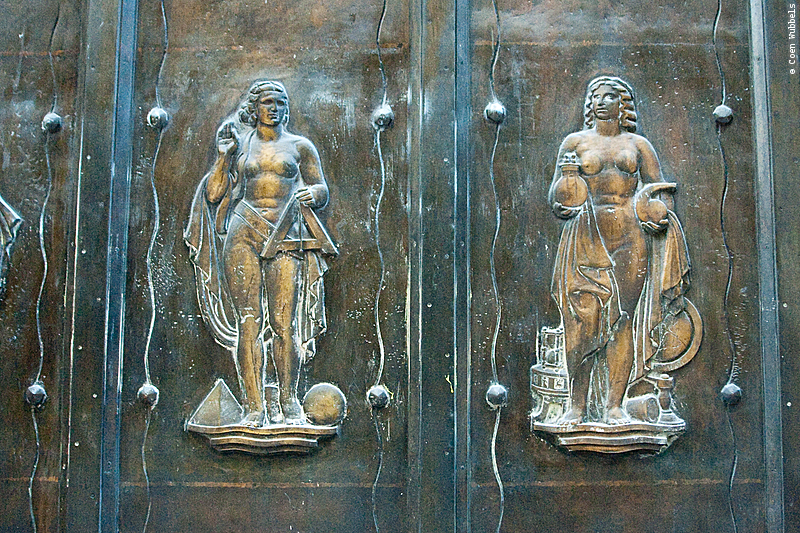 Sightseeing in Buenos Aires, let me think for a sec. Okay: taking tango lessons, eating slabs of beef, visiting the Recoleta Cemetery, strolling around Palermo, checking out the football stadium in La Boca…

All activities worth undertaking and places worth seeing. So, Coen and I did all that and more on the typical must-see-cum-do list for Buenos Aires. Then part two of the fun started, finding the city’s quiet yet charming spots, hidden churches, local restaurants, and anything else worth exploring outside guidebooks.

Sometimes we succeed on such missions, sometimes we don’t. In Buenos Aires we did and had a marvelous time in one particular neighborhood near Plaza de Mayo: the ‘Zona Bancaria’ – Argentina’s banking zone. We discovered it has much to offer in terms of churches, museums and architecture. 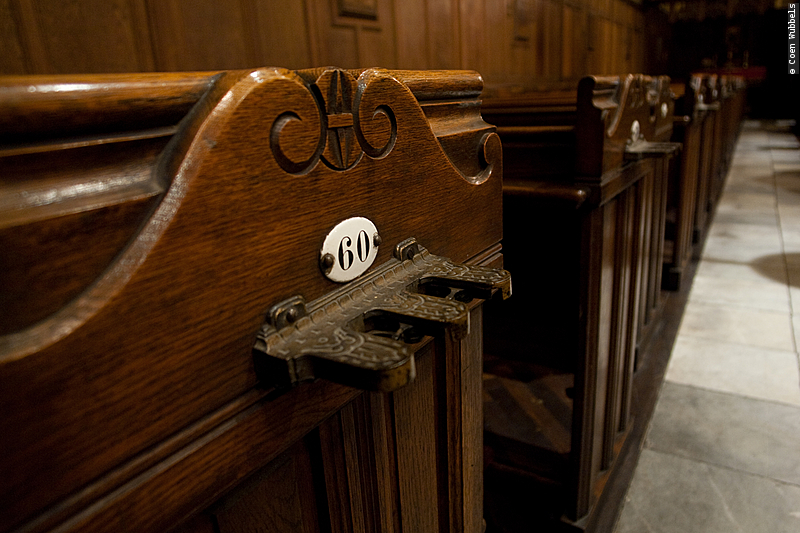 Pews with the practical solution to hang your wet umbrella…

When the British founded a community in Buenos Aires in 1825, the governor of the city donated land to build a church on 25 de Mayo, 282. St. John’s Anglican Church was one of the first buildings in neoclassical style in Buenos Aires, with six massive columns supporting a plain, triangular tympanum, lined up on a high platform.

The interior has beautiful stained glass windows, especially at night when illuminated by lanterns from the outside. The organ dates from the 19th century and is still in use. The sides of the wooden benches still have the antique holders for umbrellas, although the marble trays on the floor, which prevented the dripping umbrellas from damaging the wooden benches, have disappeared. In 1869 the church was elevated to the status of cathedral and in 2000 St. John’s Anglican Cathedral was declared a National Historic and Artistic Monument. 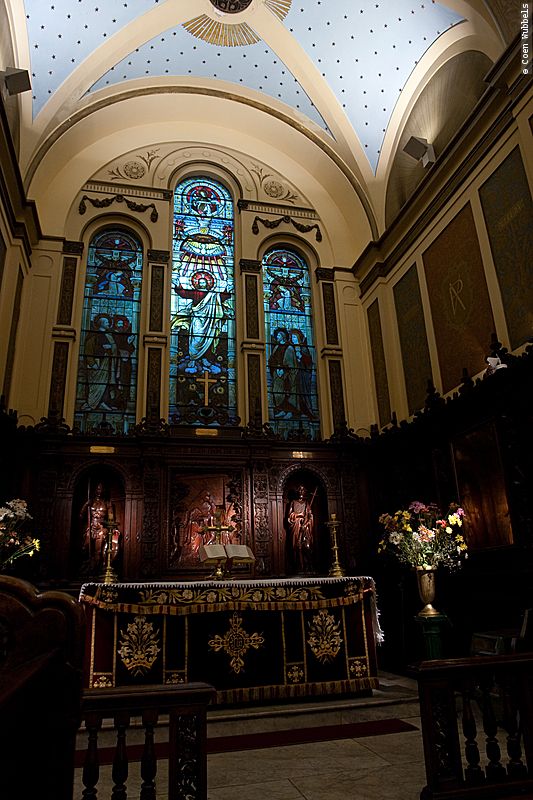 After Argentina’s declaration of independence in 1810, Banco de la Provincia de Buenos Aires was the first bank to open its doors in 1822. It was situated at the corner of what nowadays belongs to Manzana de las Luces, on Perú 272.

In 1827, the bank moved to San Martin 137, where the ‘Real Consulado’ was constructed. It was the beginning of the banking district, in those days called the ‘Barrio Ingles’ (English Neighborhood), because of the presence of the English. ‘Real Consulado’ was demolished in 1870 to make room for a larger office. The ‘Antigua Casa del Banco de la Provincia de Buenos Aires’ was designed by the German Hans Schroeder and the Englishman Henry Hunt, who were responsible for other architectural treasures in Buenos Aires as well. 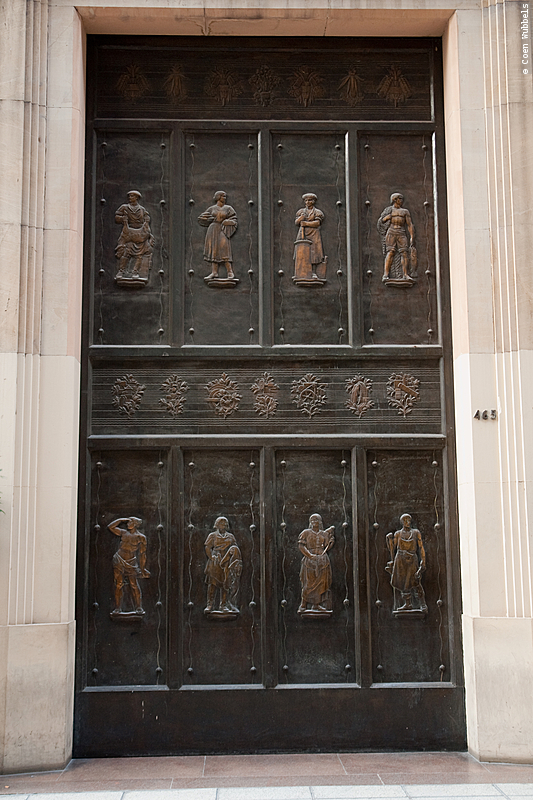 One of the bronze doors

Unfortunately, pictures are now the only legacies of this beautiful building that was demolished in 1939, to make way for modern architecture. The current office of Banco de la Provincia de Buenos Aires dates from 1940. Have a look at its amazing bronze doors (only visible when the bank is closed, they slide into the wall during opening hours), with sculptures depicting either families, or professions (situated on San Martin 137).

At Sarmiento 362, Banco de la Provincia de Buenos Aires opened a well-set up and informative museum ‘Doctor Arturo Jaúretche’, displaying the history of Buenos Aires’ banking district as well as the bank’s own history in particular (Mon-Fri 10am-6pm, free of charge). Two scale models show the differences between the banking district in 1830 and 2000, and in showcases you can admire numerous banknotes Argentina has known in its almost two hundred years of existence.

There are two other banks in the neighborhood with their own museums:

The banking district is worth a visit if for nothing else than to admire old and modern architectural designs of buildings. 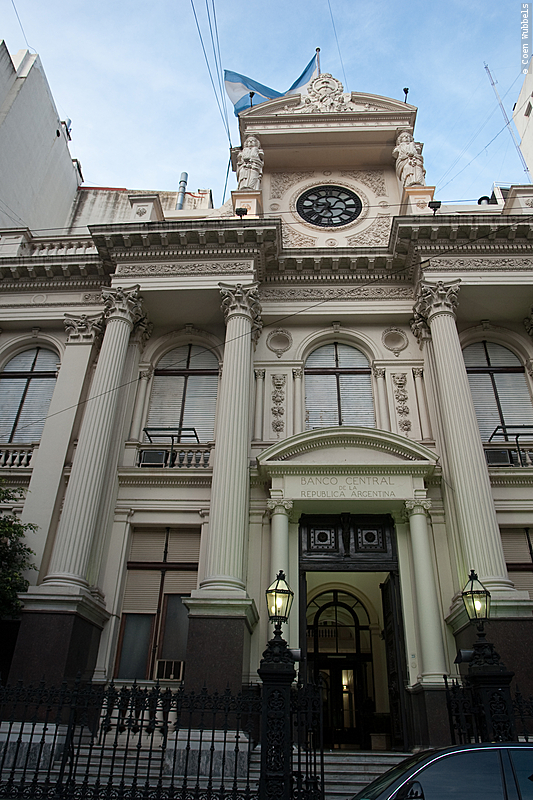 A few examples are: 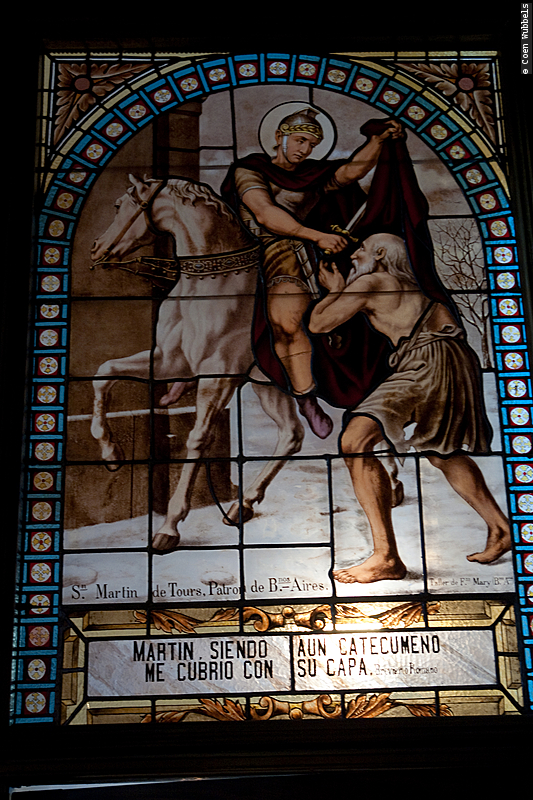 Nuestra Señora de la Merced is the patron saint of Barcelona and was brought to Argentina by the Spanish colonizers of South America. Within Argentina, several churches are dedicated to her. The construction of the first church took place at the beginning of the 17th century – a humble church made of mud and straw. The current church dates from 1779. It received the status of basilica minor in 1917 from Pope Benedicto XV.

Basílica de Nuestra Señora de la Merced is a dark church, but worth a visit for its walls and ceiling covered in frescos, as well as for its baroque and rococo styled altar. The vestibule has four stained glass windows, depicting Christ handing the keys to St Peter, the Annunciation, the Ascension of Mary, and St Martín of Tours cutting his cloak in half to share it with a beggar. St Martín of Tours is the Patron Saint of Buenos Aires and regularly depicted in its churches.

The basilica is on Reconquista 207 and open for sightseeing on Mon-Fri 9am-2pm and 3-7pm.

Adjacent to Basílica de Nuestra Señora de la Merced is the convent that belongs to the Order of Merced. Like the Jesuits, this order arrived in Argentina in the 16th century but was expelled from the country in 1822, together with several other orders. Fortunately, the church and convent survived and were declared historic monuments in 1942.

The convent has guided tours, but relatively few people visit it. I loved sitting in the courtyard where it’s easy to find some peace and quiet. The thick walls around the courtyard shut out all the noise of downtown Buenos Aires. The cloisters house bric-a-brac shops as well as restaurants that are open for lunch. 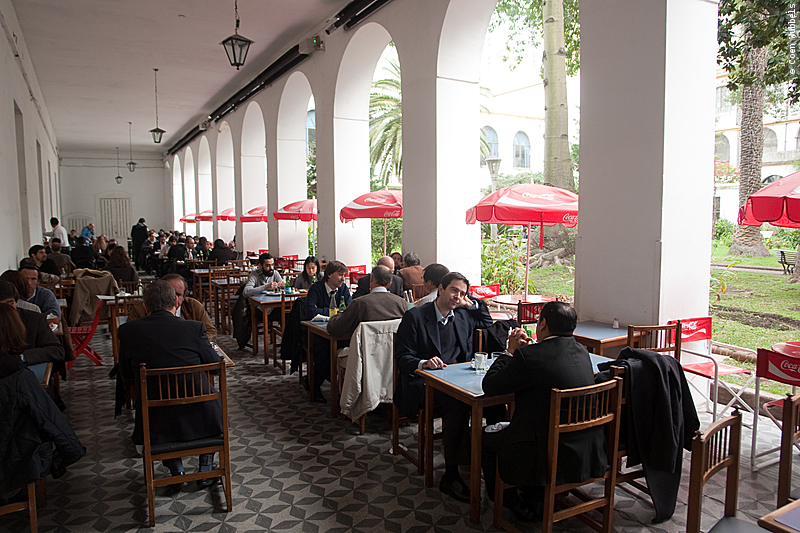 Restaurants in the cloisters of the convent

Lunch sounded like a plan to us. This was a totally different place than any other restaurant we had eaten thus far in the city, and the ambience couldn’t have been more local than here: we sat among business people who work in the surrounding banking zone. While I appreciated the typical Argentine lunch of tallerines (form of pasta), Coen enjoyed another classic local dish: milanesa Napolitana (breaded cutlets with ham and cheese). Together with a good bottle of Argentinian wine we had a splendid meal.