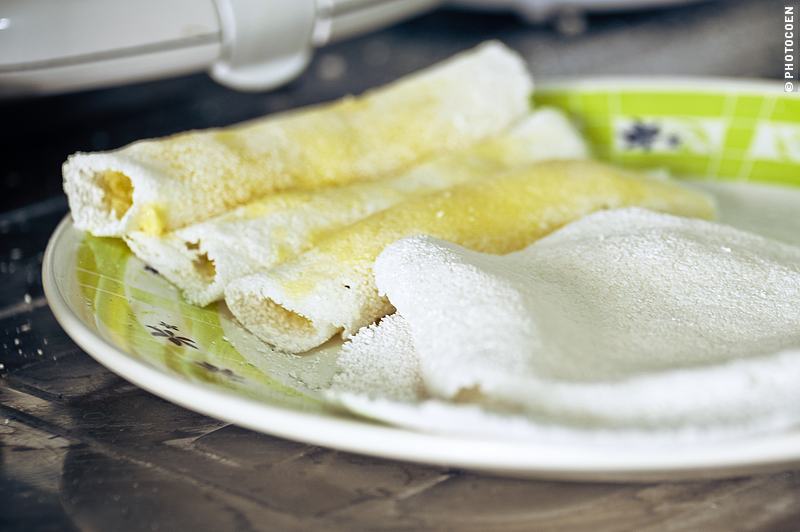 Curiosity is lying in wait for every secret.
~Ralph Waldo Emerson

“Why did I not think of this before? I’ll just buy tapioca and we’ll make beiju,” I concluded.

It was such a simple solution to such a simple problem: staying in a village where I couldn’t find bread and needed something for breakfast.

I have seen people prepare beiju and it’s like baking a pancake but then with only the flour of manioc: you sprinkle it in a frying pan, let it fuse and there you go. Is there an easier dish to make? Why did I have to travel in north Brazil, where this is a common dish for breakfast, for three months before coming up with that idea?

What is Beiju, or Tapioquinha?

The name beiju, which is used in northeast Brazil, is new to me. In the Amazon I heard the name tapioquinha, which is the same thing: manioc bread with butter eaten for breakfast. In Mato Grosso, in west Brazil, vendors sell it as a merinda – a snack that you eat in the late afternoon – and simply call it tapioca. In Rio de Janeiro you ask for a tapioca recheada.

Whatever the name, it is delicious. You can add a savory topping such as ham or cheese, or a sweet topping of coconut, chocolate or condensed milk (better: a mixture!).

Beiju is a bit of an acquired taste, though. Tapioca is a starch. It’s the by-product of manioc flour. After the manioc roots have been grated and boiled to get the poison out, the masa is squeezed through a special device called a matapi. The liquid that remains is left to evaporate and the fine powder at the bottom is tapioca. Throughout the world it is prepared and used in different ways; here in north Brazil it’s part of breakfast.

The first bite of a beiju doesn’t have much flavor and the texture is tough, kind of leathery. You have to chew thoroughly to taste it, but I have come to appreciate it as a good alternative for bread in the morning. It is incredibly nutritious and I have discovered that eating beiju is a good exercise in eating slowly, because when you eat fast you’ll eat too much and it will lie heavy on your stomach for hours – I learned that the hard way.

For 3 reais I buy a bag of tapioca, return to the Land Cruiser and announce my plan to Coen. He is skeptic.

“Don’t worry, it’s easy,” I say, a bit annoyed by his lack of enthusiasm. 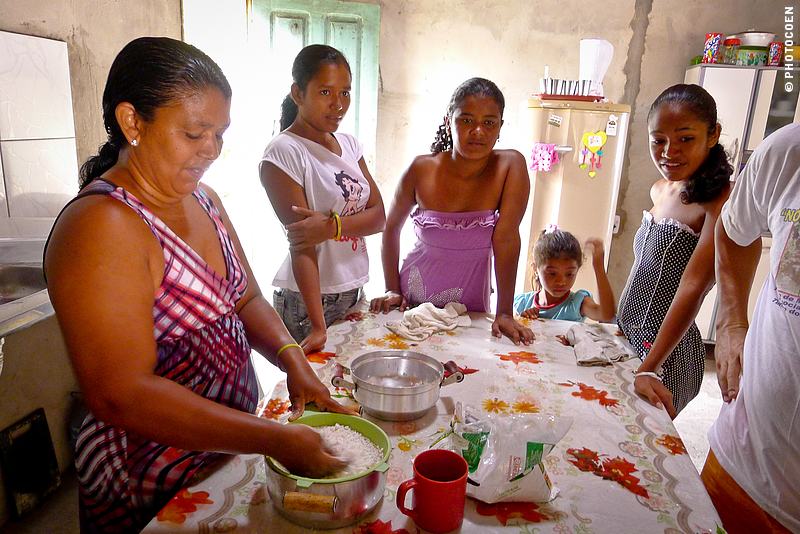 A Black Pan and Grains of Tapioca

We get out the frying pan and heat it on the stove.
The first doubts arise.

“No-o. I don’t think we need oil or butter. Just sprinkle the tapioca in the pan.”

Coen is following orders. I see no fusing of the grains. No pancake is formed – just loose grains in a frying pan that are turning dangerously black. I can’t figure out what I may have missed when watching other women prepare this, so I really can’t think of other ways to experiment.

“Well, this isn’t going to work. Let’s ask Lucia to show us,” I suggest and thoroughly scrub the pan to remove the black layer.

The Secret to Making a Proper Beiju

“Lucia, will you tell us how to make beiju? With our pan and our tapioca?” we ask.

Who knows we bought the wrong tapioca or have the wrong pan.

Lucia, her husband Marinaldo and five kids look at us.

It’s ten o’clock; they are no longer thinking of breakfast but are already preparing lunch.

“Okay, bring me two bowls and a sieve,” Lucia instructs a daughter.

“But I need bowls and a sieve,” she argues.

Granted, we didn’t bring those. 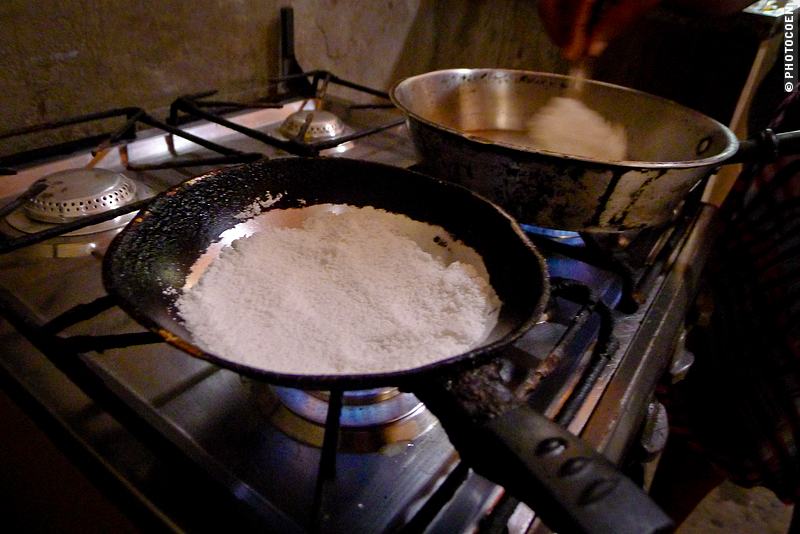 Our frying pan is put on the stove but Lucia gives up on that one quickly.

Small pan, reasonable fire.
Heat the pan.
Sieve the tapioca in the pan.
Toast it for less than a minute. The grains fuse beautifully into a manioc flat cake.
Turn it over, leave it for half a minute. Done.
Lucia slides the beiju on a plate and starts the next one.

“Hurry up. Butter,” she instructs her daughters.

One of them butters the beiju with a spoon and rolls it up. Five more beijus follow.

Meanwhile husband Marinaldo has set two cups and plates on the table under the palm leaf awning of his Guesthouse Lulayna Dunas*, together with a large thermos of coffee. We can’t convince the family to share “our” beijus made by Lucia.

“No, you enjoy your breakfast.”

When we leave we feel thoroughly content to have discovered the secret of the recipe, still oblivious to the fact that it really does need a lot of practice to get that mixture right. For now, our beijus turn out so hard that they can’t be rolled at all.

However, experimenting has also taught us that a thick layer of marmalade compensates for the extra chewing. 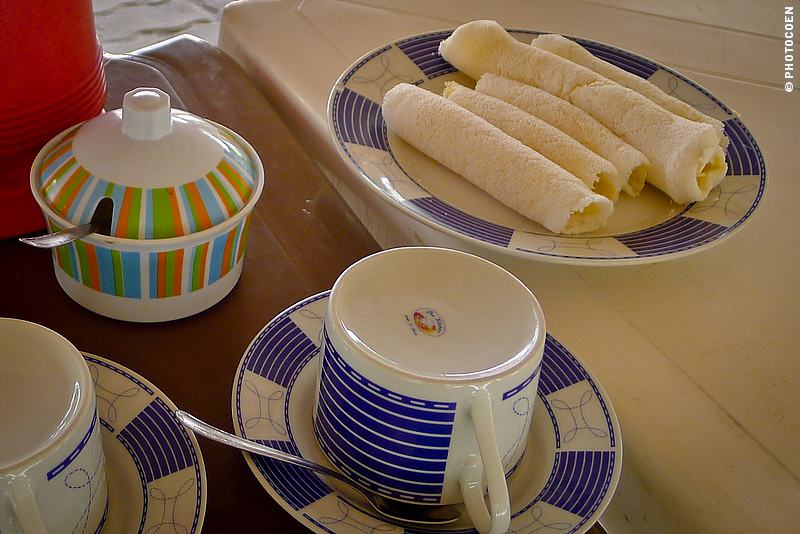 Okay, I will admit I had seen women using sieves. I had found that a completely useless exercise. Why would you sieve tapioca, which is as soft as dust?

Lucia gets a cup of water, sprinkles a bit of it on the tapioca and starts mixing it with her hand. She is moistening the tapioca, she explains.

“Of course you need water. Otherwise nothing will happen,” she answers.

Coen and I look at each other. Water!

Somehow I have always missed that part of the preparations. Now I understand the sieve. Because of the mixing with water, the grains have become much coarser than they were.

I also see my illusion shattered: this is no quick dish. While it doesn’t exactly take hours to prepare, but to mix the tapioca with exactly the right amount of water is not a matter of course. Lucia adds water almost drop by drop until she gets the texture exactly right.

Sometimes things look so simple at first glance, don’t they? This discovery of making proper beiju made me realize again how easy it is to watch from the outside and draw conclusions. And how wrong those conclusions can be if I don’t properly research, ask questions, thoroughly study what I am looking at. 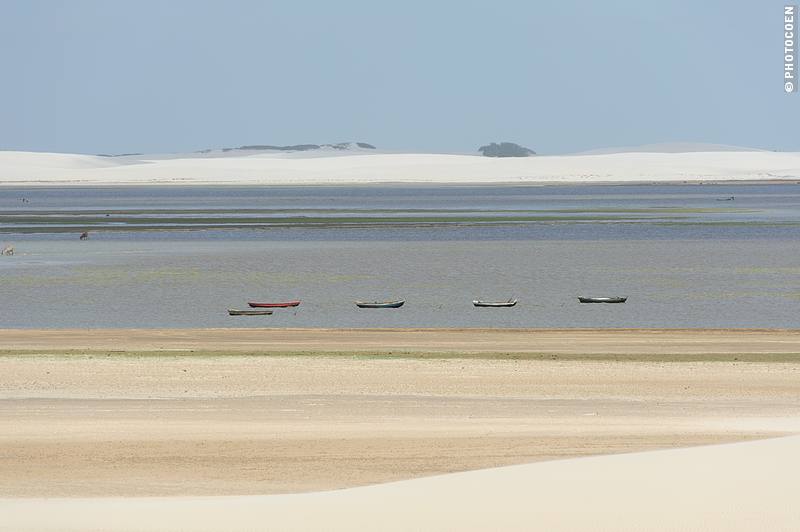 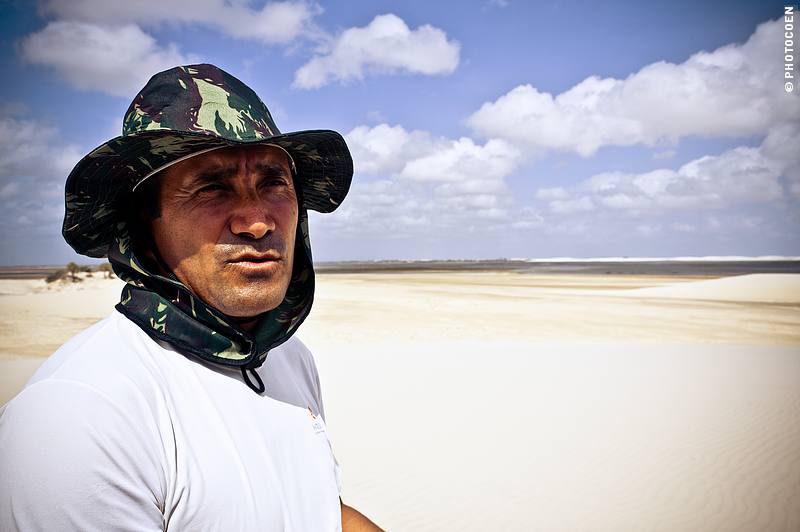 Guesthouse (Pousada) Lulayna Dunas is situated in Santo Amaro, the western gateway to Lençois Maranhenses National Park. This very basic guesthouse has rooms with private bathrooms and an open area in the garden shaded by a roof made of carnaúba palm leaves.

Marinaldo grew up in this village and knows every single dune. He married the beautiful woman and excellent cook Lucia, and they are raising five incredibly lovely children who all help out at the guesthouse. From a fisherman Marinaldo became a tourist guide who loves taking people on hiking and/or camping trips in the dunes. He took us for a tour to Lençois Maranhenses National Park.

Enjoy more stories:
Taking a Kitesurfing Course in Brazil, at Tatajuba Beach
An Act of Kindness (Day 11): Opening Your Restaurant When it Isn't Open Yet
Cycling in Yunnan's Countryside Around Lijang, China

3 thoughts on “Eating Starch? – What’s the Secret to Making a Proper Beiju?”